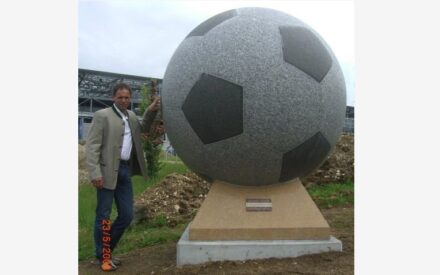 The soccerball is the culmination of Austrian master stonemason Helmut Moser’s craftsmanship. And this despite the fact, or perhabs because, the sphere is hollow, the pieces need no strutting for increased stability and are a mere 10 cm thick. The owner of the small stonemasonry in Seekirchen not far from Salzburg could not have built his tribute to the European Champions Cup 2008 in massiv stone, even if he had wanted to: even in the hollow version, the work of art weighs 2,4 t.

The European Champions Cup play-offs will be held under the joint auspices of Austria and Switzerland. What better way for Helmut Moser to pay tribute to the guild and ride the media-band-waggon than to build a giant stone soccer-ball now on exhibit perched on a pedestal of local Untersberg-Limestone in front of Salzburg’s stadium. The „leather“ is comprised of 20 light-colored hexagons made of Tarn-granite and 12 dark pentagons made of Impala-granite.

The actual artwork began with the polygons. They are held together by means of gudgeon and tongue and groove linkages. Precision of one tenth of a millimeter was required simultaneously taking into account complex angle calculations.

To top it off, the pieces, each weighing 65 to 73 kg, had to be put together by hand. As a final touch the surface was bushhammered and charred giving the art work the soccerball-look.

As Helmut Moser told BusinessStone.com in a recent e-Mail, he used nothing but traditional handicraft: „The object is built with detail and refinement required of a stonemason.“ Calculating the statics of force derived from one piece of the ball to the next was a bit of meticulous work though.

Another bit of trivia: the diameter of the ball is exactly 2008 mm corresponding to the year of the Championship. 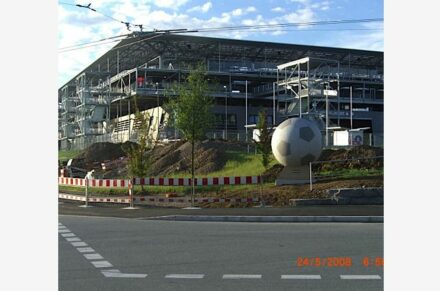 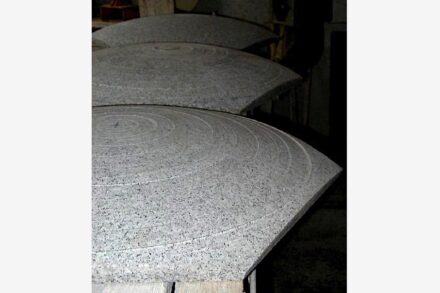 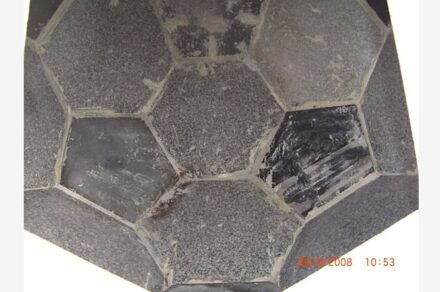