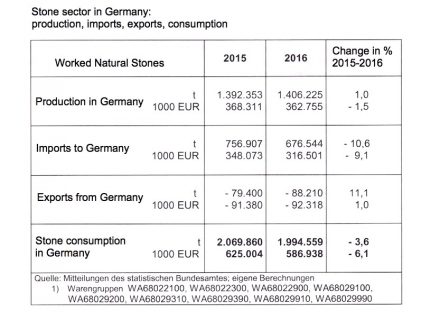 Times are not bright for Germany’s natural stone branch. This is documented not only by the facts and figures published by the Deutsche Naturwerkstein-Verband (DNV) relating to 2016: not only did natural consumption experience negative growth by (-)3.6% despite the sustained building boom! The prices, too, in almost all market segments were forced to cope with a significant downward trend.

The basis for statistics were the facts and figures provided by the Federal Statistical Office of Germany and the Natural Stone Branch’s Trade Representative DNV’s own statistics.

The associations CEO, Reiner Krug, sees one of the reasons for the deflation in the sharp competition coming from general contractors in lucrative building projects: „Big contracts are given to general contractors, who undermine prices and apply considerable pressure on competitors to cut their prices as well.“ 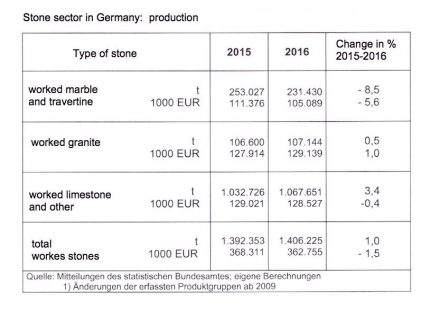 Perhaps the over-supply of natural stone, which we had already pointed out relative to the markets in China, Turkey, Brazil, and Italy is also to blame.

German companies paid the same price for imported natural stone as one year earlier, which might be a result of Italy’s strong position. Italy had experienced a significant price hike in value-added stone-products in 2016. Germany is a major buyer of „Made in Italy“.

But the ceramic industry was no better off: tiles and flooring saw no significant rise in prices over the last five years.

In comparison: the ceramic industry chalked up turnovers amounting to 5.2 billion €. Germany’s natural stone branch could boast a turnover of 587 million € for the same period.

But this does not explain why despite a building boom in Germany, less natural stone was used (see above).

Gross domestic product is poised for a real increase by +1.5%. Private households are expected to increase consumption by +1.1% and the State will be spending +2.6% more.