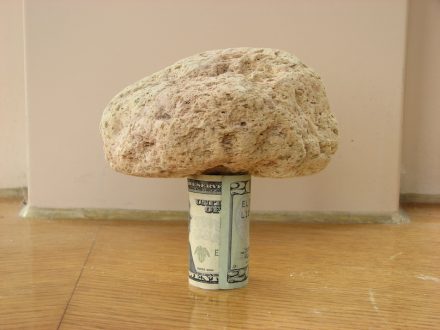 It’s true — some rocks can float on water, even for years at a time. They’re so-called pumice rafts, agglomerations of this lightweight volcanic rock which can form debris patches on the ocean of hundreds of meters length, travel thousands of kilometers across the ocean and even cause trouble for boats. Scientists of the University of California at Berkeley have now found an explanation for this phenomenon.

While it is long known that pumice can float because of pockets of gas in its pores, it was not understood how those gases remain trapped inside the stone for prolonged periods.

„It was thought that the pumice’s porosity is essentially sealed,” says Kristen E. Fauria, a UC Berkeley graduate student who led the study. But pumice’s pores are largely open and connected.

By X-ray experiments – performed at Berkeley Lab’s Advanced Light Source (ALS), an X-ray source known as a synchrotron – the researchers found that the gas-trapping processes that are in play in the pumice stones is related to surface tension, a chemical interaction between the water’s surface and the air above it that acts like a thin skin. It allows some creatures, including insects and lizards, to actually walk on water.

Surface tension serves to keep the bubbles locked inside the pumice for prolonged periods. „The process that’s controlling this floating happens on the scale of human hair,” Fauria says. „Many of the pores are really, really small, like thin straws all wound up together. So surface tension really dominates.”

Only on longer time-scales diffusion processes let the gas „leave“ the pores and enter the outside water causing the stone to sink.

The „bobbing“ of pumice rafts is caused by changes in the outside temperatures which make the gas expand during the heat of the day and lets the stones float on the surface until the temperature drops and they sink. 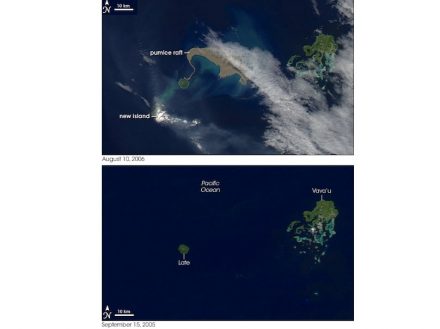 The study may also help to better understand undersea volcanoes whose eruptions are very difficult to trap.

Here, another question is how volcanic stone, ejected from deep underwater sources, finds its way to the surface: While pumice from volcanoes on land tends to be smaller than a golf ball pieces spewed from submarine eruptions vary widely in size. They can typically be about the size of an apple, but may also reach one meter in length.

Learning about its flotation of those rafts can help understand how species are spread around the planet; pumice is nutrient rich and readily serves as a seafaring carrier of plant life and other organisms.

Floating pumice can also be a hazard for boats, as the ashy mixture of ground-up pumice can clog engines.

The study was published in Earth and Planetary Science Letters.