Sandstone statue of a guardian discovered near Angkor Thom in Cambodia 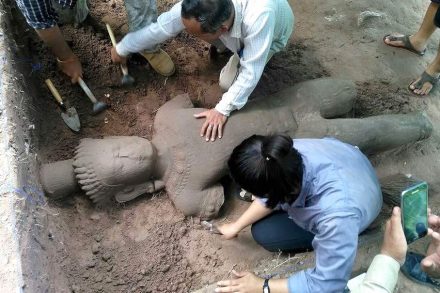 A sandstone statue of a guardian which stood at the entrance to an ancient hospital was recovered near Angkor Thom in Cambodia. The figure is 1.90 m high and 0.58 m width. Its arms and legs are broken but engravings on its body and head can still clearly be seen, Cambodian Apsara informs. Apsara is the National Authority for the Protection and Management of Angkor and the Region of Siem Reap.

The unique find belongs to the famed Bayon style which is associated with King Jayavarman VII. This ruler from the 12th century had declared Angkor Thom the new capital of his kingdom. It is located about 1 km North of the temple of Angkor Wat.

There are often two guardian statues (or carved images) depicted in front of ancient temples. Although Jayavarman VII was a Buddhist, the statues in Cambodian temples are usually associated with both ancient Buddhism and Brahmanism (Hindu).

The team which made the find comprised Apsara archaeologists and colleagues from the University of Technology and the Institute for Southeast Asian Studies of Singapore. They were at the site near the Tonle Snguot hospital to investigate ancient hospital activities, habitation, and structures.

Ancient temples likely served for spiritual healing and as praying areas. The treatment area is possibly a separate location in the complex. Medical treatment is depicted in the stone carvings at the Bayon temple. Ancient inscriptions also describe the nurses, doctors, guards, cooks and other people.

The statue will be transported to the Preah Norodom Sihanouk Angkor Museum because of its importance. 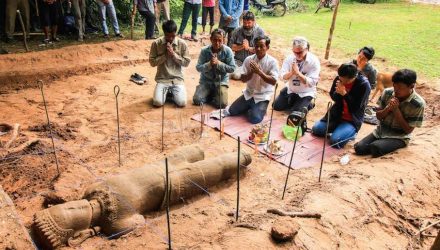