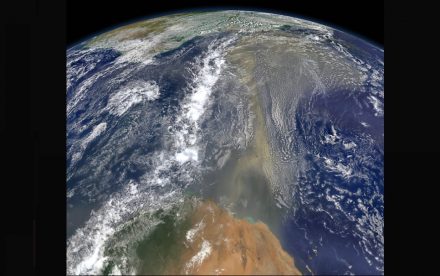 Airborne dust from Asia travels across the Pacific passport -free, carrying pollution, building soil, and coloring sunsets thousands of miles from its source. Identifying the source is important for understanding atmospheric circulation, contaminant pathways, and climate. Now, a team of researchers has developed a way to match microscopic quartz grains to the desert they blew in from.

A major source for atmospheric dust is also the African Sahara whose sand is an important fertilizer for Brazil’s tropical rain forest.

The researchers, led by Kana Nagashima of the Japan Research and Development Center for Global Change, used cathodoluminescence (CL) spectral analysis of tiny quartz grains to distinguish between two major Chinese dust sources: the Gobi and the Taklimakan Deserts, both North of the Himalaya. „The cathodoluminescence spectra of single quartz grains provide crystal-chemical features in quartz, such as impurities and imperfections,“ explains Nagashima.

Those features, she says, vary with the conditions of quartz formation and later geological events such as metamorphism.

The grains, collected from loess, riverbeds, and sand dunes, ranged in size from 5 to 16 micrometers. That matches the clay to silt size typically blown across the Pacific Ocean.

Previous studies provided an overall average value for isotopes such as strontium and neodymium, says Nagashima. „Instead,“ she says, „our CL spectra shed light on the heterogeneity in grains.“

This suggests a way that very small samples (a few tens of microscopic grains) can reveal big information about the pathways and effects of long-distance airborne dust.

Annually about 1,8 billion t of mineral dust is lifted into the atmosphere by turbulences and is sometimes transported over thousands of kilometers, scientists estimate. About half of that airfreight is supposed to come from the Sahara. Volcanic explosions are another source.

The particles with a size between 0.1 – 10 µm (thousandth mm) play important roles in global climate: in the atmosphere, they are condensation nuclei which create clouds (that may become hurricanes); also they have an influence on the reflection and distortion of sunlight.