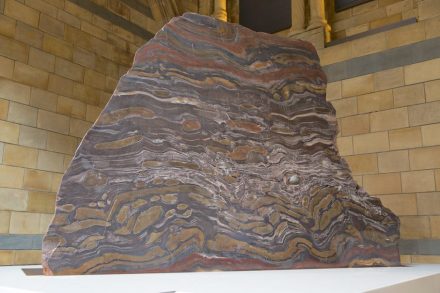 The slab of banded iron ore on the photo is a document of an important phase in the Earth’s history: about 2,5 billion years ago, the foundations were laid for today’s life. Scientists call the episode „The Great Oxygen Event“.

In the Archean (4-2,5 billion years ago), planet Earth was a hostile site. Life existed only in the oceans in form of simple Cyanobacteria or Cyanophyta, which were adopted to the surroundings without free oxygen.

But 3 billion years ago, these single-celled organisms started to obtain their energy through photosynthesis which meant an emission of oxygen into the water.

There, the gas immediately reacted with dissolved iron. Metal molecules were created which sank to the ground due to their weight.

Over millions of years, they formed thick bands of metal (mostly hematite and rare magnetite) in a mixture with other substances and interlaced with bands of silt made of silicious materials.

Iron ore we call these bands today. They are found globally as the Great Oxygen Event happened all over the earth. The inconspicuous bands are probably a result of changes in the bacteria’s activities due to temporary changes in their environment.

Again millions of years later, all the dissolved iron had been extracted from the water – the oxygen now was emitted to the atmosphere.

Finally, it came to that 21% of oxygen in the air to which nowaday’s life is adapted to.

The anaerobic single-cell organisms which had been dominant before only found survival in niches like e.g. vulcanic vents down in the oceans or in hot salted fountains on the surface.

The block of banded iron on the photo comes from the Pilbara region in northwestern Australia. It is exhibited in the Hintze Hall of the London Natural History Museum as one of the documents of Earth’s history there.

„The mining company Rio Tinto had identified a 12-tonne lump of iron formation at one of its open-cast mines and had it cut down, polished and shipped to the museum,“ a press release from the museum informs. „Containing approximately 32% iron, the formation didn’t qualify as an ore-grade material, which would have made it useful to the company. Ore-grade materials require 58-62% iron content.“