Old Faithful in the Yellowstone Park: where its reservoir is located and new understandings of the shockwaves at its eruptions 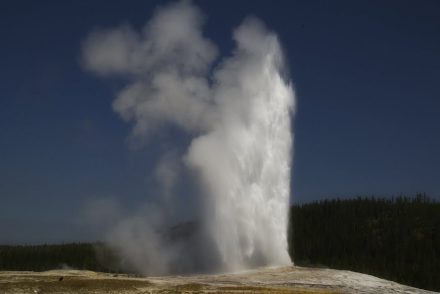 Old Faithful is Yellowstone National Park’s most famous landmark. Millions of visitors come to the park every year to see the geyser erupt every 44-125 minutes. But despite the geyser’s fame, relatively little was known about the geologic structure from which the hot water is fueled and how the timing of eruptions is related to precursor ground tremors before eruptions.

Now, scientists from the University of Utah have revealed the reservoir of heated water that feeds the geyser’s surface vent. The mapping was made possible by a dense network of portable seismographs and by new seismic analysis techniques. The results are published in Geophysical Research Letters. Doctoral student Sin-Mei Wu is the first author.

Old Faithful was discovered in 1870 and named after is eruptions happening often and quite constantly. It is an iconic example of a hydrothermal feature, and particularly of the features in Yellowstone National Park, which is underlain by two active magma reservoirs at depths of 5 to 40 km depth that provide heat to the overlying near-surface groundwater.

The scientists’ objective was to understand more about the shallow subsurface geology under the geyser. The signals close to the surface are much weaker than seismic data from earthquake deep below, and they are overlain by background vibrations from car traffic, winds, water etc.

In addition to the 30 permanent seismometers around the park to recording ground shaking and monitor for earthquakes and volcanic events, the Utah team installed deployed 133 new instruments in the Old Faithful and Geyser Hill areas for a two-week campaign.

The sensors picked up bursts of intense seismic tremors around Old Faithful, about 60 minutes long, separated by about 30 minutes of quiet. When Farrell presents these patterns, he often asks audiences at what point they think the eruption of Old Faithful takes place. Surprisingly, it’s not at the peak of shaking. It’s at the end, just before everything goes quiet again.

Professor Jamie Farrell explains: After an eruption, the geyser’s reservoir fills again with hot water, „as that cavity fills up, you have a lot of hot pressurized bubbles. When they come up, they cool off really rapidly and they collapse and implode.” The energy released by those implosions causes the tremors leading up to an eruption.

When analyzing data from the seismic sensors, the researchers noticed that tremor signals from Old Faithful were not reaching the western boardwalk. Seismic waves extracted from another hydrothermal feature in the north slowed down and scattered significantly in nearly the same area suggesting somewhere west of Old Faithful was an underground feature that affects the seismic waves in an anomalous way. With a dense network of seismometers, the team could determine the shape, size, and location of the feature, which they believe is Old Faithful’s hydrothermal reservoir. 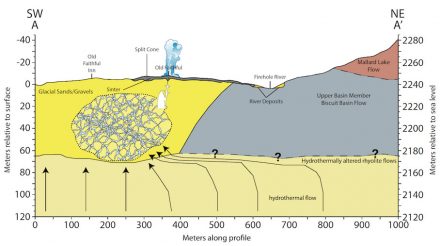 Doctoral student Sin-Mei Wu estimates that the reservoir, a network of cracks and fractures through which water flows, has a diameter of around 200 meters, and can hold approximately 300,000 m³ of water or more than 79 million gallons. By comparison, each eruption of Old Faithful releases around 30 m³ of water, or nearly 8,000 gallons. „Although it’s a rough estimation, we were surprised that it was so large,” she says.

The research was funded by the National Science Foundation and by King Abdullah University of Science and Technology, the Brinson Foundation, and the Carrico Fund.