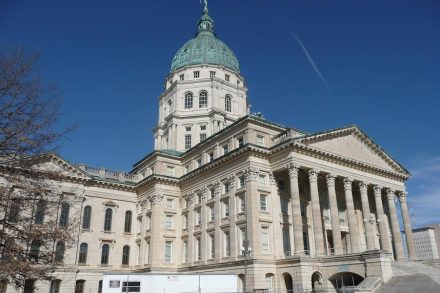 The representative building complex was painstakingly renovated from cellar to roof

After 14 years of renovation and restoration the refurbished Kansas State Capitol stands proud in its original glory since work was completed in 2014 at a cost of 332 million US-$, close to three times the originally ear-marked 120 million.

But in return, the building now boasts state-of-the-art technology, an added story, more and bigger office space, and two subterranean parking areas. The opulent interior décor including ample marble and granite was completely restored to its original gleam.

A new visitor’s center was added to the cellar between the foundation layers. A description for visitors focuses their attention: „Watch for the transition from new, smooth limestone, to old textured stone as you walk into heart of the building.“

With this, the authors mean to point out the flooring which lends a unique accent. Local limestone is predominant, e.g.: in the façades. But here, Crema Marfil Coto originating from Spain was implemented and provided by Levantina because it exactly matches the architect’s specifications as to properties and colors. 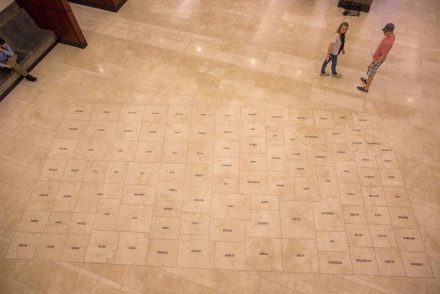 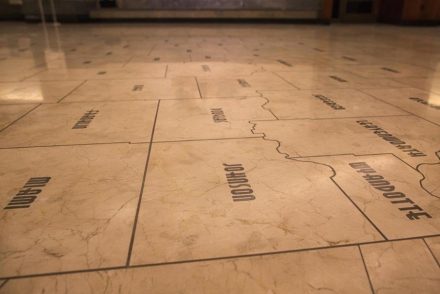 The inlays are the names of 105 counties and their boundaries in Gris Pulpis Marble.

Installation was carried out by Carthage Stone Company.

The original Capitol, built from 1866-1903, was an ambitious undertaking begun a mere year after the end of the Civil War and a mere five years after Kansas became the 34th State of the Union.
Nevertheless politicians met the challenge to set the building on equal footing with its national counterpart in Washington DC.

37 years and 3.2 million US-$ later „The Capitol’s long and difficult construction reflects the determination, patience, and fortitude of Kansans“ as per a book summarizing the State’s architecture.

Many a story can be heard revolving around the façade’s natural stone, most of which can be found on the web page of the Kansas Historical Society, of which we recount but a few.

Architect John G. Haskell, e.g. was sent off to find suitable stones from the East Coast but not farther East than Philadelphia. Haskell found what he was looking for close to Manhattan in Riley County, Kansas, but there was no railway from there to Topeka.

So the choice fell on Deer Creek Limestone from south of the capital, a poor decision because insufficient time was spent in curing the stone. A severe winter in 1866 made the foundation crumble. 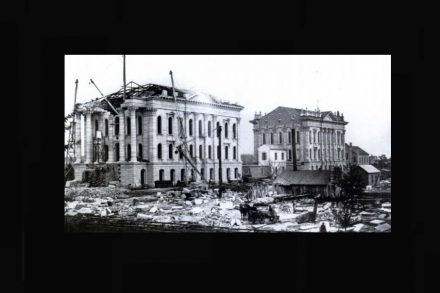 Finally the right material was discovered: the East Wing was clad in Fort Riley Limestone from Junction City. The other Wings and the rotunda were clad in Cottonwood Limestone from Chase County according to a publication by the Kansas Geological Survey.

The building site situated in the midst of the then inconspicuous downtown Topeka could not be overlooked or, for that matter, overheard. Many a construction worker came as immigrants from Germany and Italy. 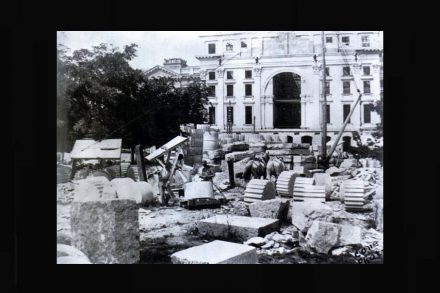 The heavy stones were brought into position literally by horsepower: „A whistle from the foreman notified the driver of the team when to proceed forward or backward and when to stop“ as the Historical Society reports, „the horses became so accustomed to the repetition of the signals that they responded without prompting.“

From 1886 to completion the electric derrick „the first ever built”, was used according to the daily press.

The building was exposed to rough times, e.g. having to bear tornados of the highest category and the unrests from the so-called Dust Bowl, which ensued as a result of abusive zoning and use of land turning the prairies into semi-arid regions. John Steinbeck described in his famous novel „The Grapes of Wrath“ this phase of poverty and destitution all over US Midwest.

By the end of the 20th century, time had taken its toll of the limestone and made it brittle. During the restoration several thousand stone grafts were set into the old material, some weighing a ton or more.

Minnesota’s State Capitol exterior stone restoration received the Grande Pinnacle Award 2016 by MIA+BSI: The Natural Stone Institute. „It may be the largest and most complex restoration project the US has ever seen“, the jury wrote.