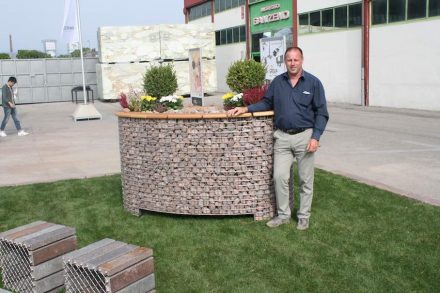 Italian-based Zanettin company is specialized in stainless steel gabions sometimes creatig the unexpected in the shape of steel wire containers filled with pebbles. At this year’s Marmomac, Stefano Zanettin presented his one and a half meter high gabions topped off with flower boxes. We asked ourselves if the company was aiming to take over the market for elevated flower beds.

But quite the contrary is true, and, a glance at the lower shape of the box should have told us so: There is a special nook for a fork lift – and, aha, the construction is made to be mobile.

But the actual use remained concealed even though we had reported on a similar idea: Zanettin’s gabion XL weighing 2.8 t as a means of protecting against terrorist attacks with trucks, e.g. like those which had recently taken place in Nice, Barcelona, Berlin, or now in Manhattan.

Not long ago, reported on an initiative by the city of Cologne where massive chunks form the Cathedral’s façade had been placed around the building. But the weakness of the idea lay in the fact that the chunks were not heavy enough to ward off heavy transport vehicles effectively.

Zanettin developed its anti-terrorist gabions in cooperation with the local Cembra Lisignago Police department not far from Bolzano.

The fact that these blockades are decorative and an enrichment to the urban landscape in their own right speaks in favor of their use. With the addition of flowers integrated within or on top or a bench or seating as part of the box, they are practical and aesthetically pleasing all at once.

They are also more flexible than concrete cubes as they are delivered empty and filled on the spot with local material. They can be transported by means of fork lift to the precise position needed thanks to the nook at the bottom of the gabion or they can be placed with the help of a crane and hook mounted in the middle of the wire cage. 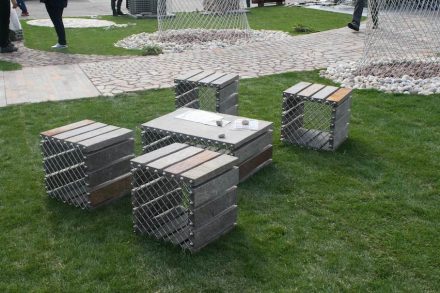 Another novelty of Zanettin at this year’s Marmomac was the seating group for which narrow strips of stone are used holding together a stainless-steel mesh. Thus, the ensuing seating and tables have integrated stone material but are nevertheless light weight. The new series was developed in cooperation with Top Center Porfido Company. 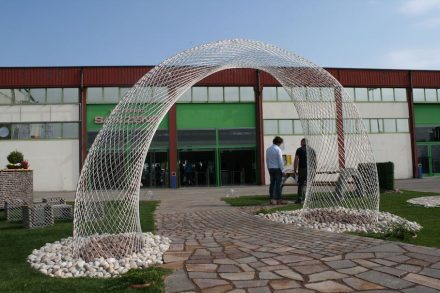 The steel mesh was new as well, able to form curved shapes. Yet to be seen: how to fill them with pebbles. 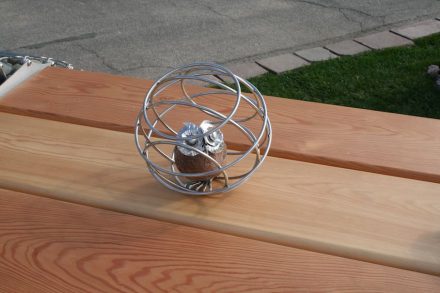 Cute idea: the gravel owl in the wire mesh container.