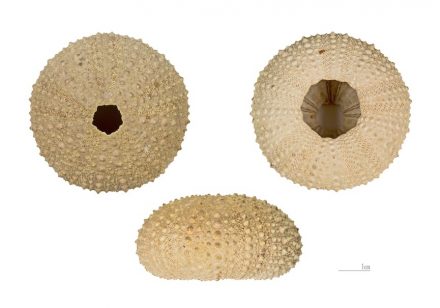 The spherical exoskeleton of sea urchins is composed of calcium carbonate and is one the most treasured findings of any beach. The spiny exterior of these lifeforms seems impenetrable at first sight. But crabs and fish crack the armor with claws and teeth, starfish expel their stomach and excrete a substance which disintegrates the exoskeleton of the sea urchin, snails dissolve the shell by means of sulfuric acid.

On occasion of the 100th anniversary of the October Revolution, Deutsche Welle tv-station has published pictures of Lenin-sculptures in stone or steel. According to the Gregorian calendar, the important event in history took place on November 7, 1917, the Julian calendar dated it on October 25 (German).

Madagascar Minerals is a company based in the USA which produces objects made of natural stone or semi-precious stone respectively from the Madagascar peninsula in the Indian Ocean.

The Dry Stone Walling Association of Great Britain (DSWA) celebrates its 50th anniversary in 2018 and is planning a National Walling Competition at Kirkby Lonsdale, near its headquarters in Cumbria, on May 20, 2018, Stone Specialist magazine reports.

Drywalls: a French web site bears information on scientific analysis from qualification to contacts. Texts are in French language only. 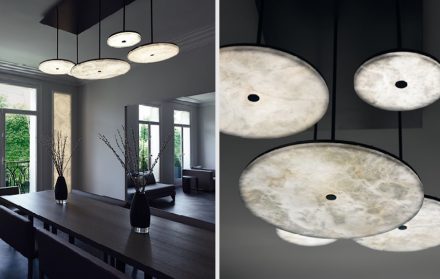 „Manhattan“ is the name French designer Alain Ellouz gave to his new pendant lamps. They are made of Alabaster discs with 30-70 cm diameter.

„Wine & Stone“ program by ,MIA+BSI: The Natural Stone Institute’ promotes stone by wine tastings. The new program includes a revised CEU presentation that covers ten stones and places a greater emphasis on the correlation between wine and stone. The kit how to do is available through the Women in Stone initiative (1, 2).

Cosentino Group, producer of Silestone and Dekton, has opened its new headquarter for North and Latin America in Miami (Spanish).

The Roman Temple of Mithras excavated in the City of London can be visited at the London Mithraeum Bloomberg SPACE underneath Bloomberg’s new European headquarters at 12 Walbrook, London.

The Newichawannock Canal is often referred to as the State Line Canal because one side is in Maine and the other in New Hampshire. The New Hampshire Magazine tells the story of this hidden stonework.

Widows of mine and quarry workers in the Indian state of Rajasthan want compensation as their husbands died of silicosis, Al Jazeera reports.

Video of the Month: „Beautiful Beasts“ is the name of a collection at Dublin’s museum The Ark providing art and entertainment for children. Its latest acquisition is Silkie the Seal made of Kilkenny Blue Limestone. Sculptor Helen O’Connell made a video on its emergence. The stone block was provided by McKeon Company (1, 2).