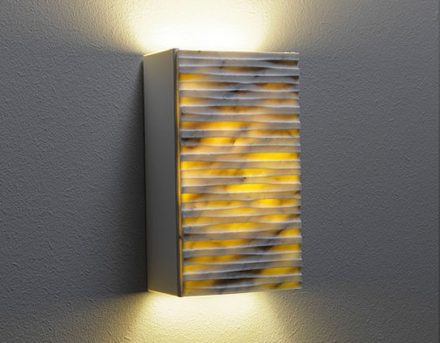 Natural Stone Lamps are a product category of their own at Marmi Serafini. Not only the translucent ultra-thin stone is implemented in producing lampshades. Thicker material offering decorative effects is also used. The lamp shown here goes by the simple name of „Pedra“. Designer is Raffaello Galiotto.

Company concentration on the Belgian stone market: Brachot-Hermant has bought Beltrami. As the British magazine Stone Specialist reports the reason was Beltrami’s succession plan: only one child of the owner is active in the stone business (running the webportal Stoneasy.com) (1, 2). 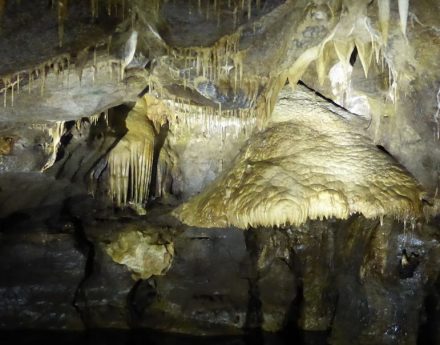 Marble Arch Caves in Northern Ireland is a geopark with subterranean waterways and caves within a mountain. But the stone is not marble: it is limestone.

Brazil’s city of Cachoeiro de Itapemirim welcomed a delegation of visitors from the Chinese city of Nan’an. Both cities are natural stone centers. A letter of intent for cooperation was signed (Portuguese).

After citizens had rejected Hamburg’s application to host the Olympic Games, the site is now to become a new city district. It is one of Europe’s most ambitious urban planning projects (German).

A 20,000-pound piece of a granite sculpture dropped from the top of a crane as it was being installed for Art Basel Miami Beach.

Entries for the next Natural Stone Awards by Stone Federation Great Britain are open until April 30, 2018. The biennial Awards celebrate and recognize the excellence of design in natural stone projects from across the industry. Projects must come from within the British Isles and the construction work must have been completed within the three-year period ending 2 April 2018. Winners will receive a trophy or a certificate.

Corner-symmetry in the Hungarian capital Budapest is documented by Zsolt Hlinkea, photographer.

Video of the Month: working natural stone has a great deal in common with art according to a web page of the LSI Stone Company, Portugal. Its CEO Regina Vitorio has commissioned a new video showing this similarity in an artistic dance. Much the same idea albeit implemented quite differently can be seen at Stonecycle Company of Italy (1, 2).