Unique Stalactites: like hanging bells and in an underwater cave 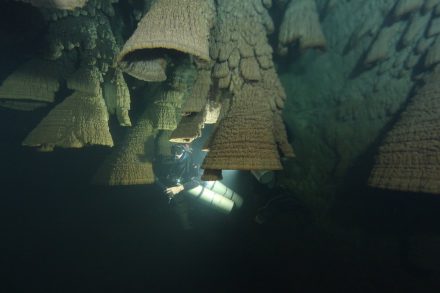 Hanging speleothems, also called stalactites, result through physicochemical processes in which water high in calcium carbonate dries up. Normally they rejuvenate and form a tip at the lower end from which the drops of water fall to the cave floor. Yet the formations in the El Zapote cave, which are up to two meters long, expand conically downward and are hollow with round, elliptical or horseshoe-shaped cross-sections.

And: it was underwater instead of in a dry cave where they were formed.

A German-Mexican research team led by Prof. Dr. Wolfgang Stinnesbeck from the Institute of Earth Sciences at Heidelberg University has investigated how these bell-shaped, meter-long formations developed, assisted by bacteria and algae. The results of their research have been published in the journal „Palaeogeography, Palaeoclimatology, Palaeoecology”.

The Hells Bells, so-called by local divers, in the El Zapote cave near Puerto Morelos on the Yucatán Peninsula, is not just unique in shape and size, but also in their mode of growth, according to Prof. Stinnesbeck. They grow in a lightless environment near the base of a 30 m freshwater unit immediately above a zone of oxygen-depleted and sulfide-rich toxic saltwater. 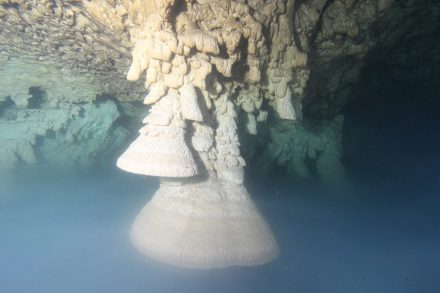 Uranium-thorium dating of the calcium carbonate verifies that the formations must have grown underwater, proving that they must have formed in ancient times. Even then the deep regions of the cave had already been submerged for thousands of years. 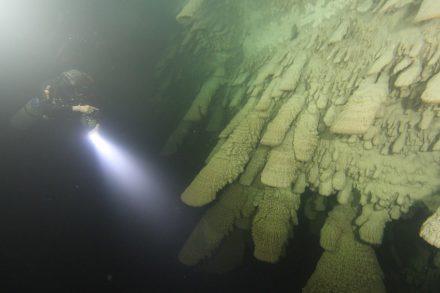 The researchers suspect that the growth of the structures is tied to the specific physical and biochemical conditions near the halocline, the layer that separates the freshwater from the underlying saltwater. „Microbes involved in the nitrogen cycle, which are still active today, could have played a major role in calcite precipitation because of their ability to increase the pH,“ explains Prof. Stinnesbeck.

According to the geoscientist, this underwater world on the Yucatán Peninsula in Mexico represents an enigmatic ecosystem providing the conditions for the formation of the biggest underwater speleothems worldwide. Previously discovered speleothems of this type in over places are much smaller and less conspicuous than the Hells Bells. 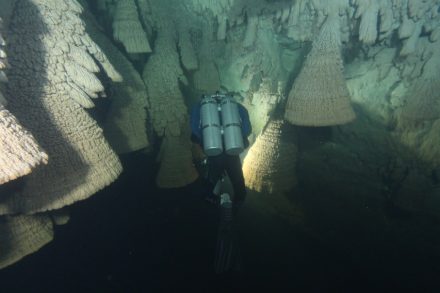 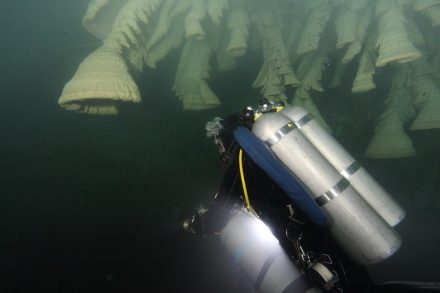