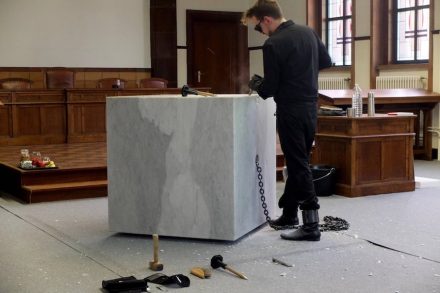 After 19 days trying to chisel down a 4-ton-block of Carrara marble, Belgian artist Mikes Poppe stopped his performance because the stone had proved too hard. Poppe had locked himself with a chain around one leg and the other end in the block and had planned to free himself only with hammer and chisel within 10 days. The performance was part of an exhibition in the courthouse in the Belgian city of Ostend.

438 hours Poppe did not leave the courtroom, chiseling, eating, sleeping and even using a mobile toilet next to his stone.

The symbolic meaning of his action entitled „De Profundis“ was to show how artists are under pressure by the „inescapable burden of history” and that „sometimes one has to break through the fixed mindset to find one’s own voice“, according to a report in British newspaper The Telegraph.

Poppe had only little chiseling more to do when he gave up. 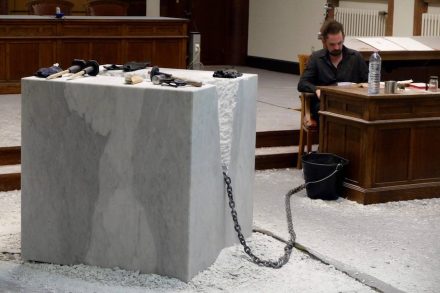 Yet for him, the performance was a success as had been in communication with visitors to the exhibition. They had understood his message, he hoped.

The entire performance was live-streamed on YouTube. A time-lapse version is available on the artist’s webpage. Shown is also the unexpected ending and how the artist was freed with side cutter tools.

Finally, Poppe concluded that he had „underestimated the marble“.

On his webpage he writes in a self-portrait: „Poppe’s work focuses on questioning the relevance of art performance today: how does a young artist relate to today’s art world where (performance) art is often reduced to theatre or even entertainment…“