Global Housing Report: Demand to be strongest in North America through 2021 while potential crisis looms in Western Europe 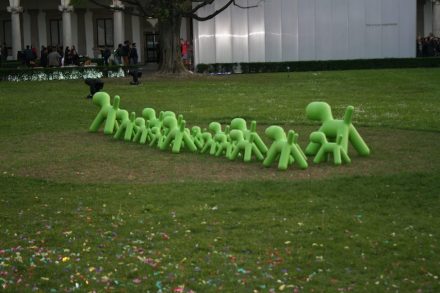 North America will post the fastest gains in new housing construction of any global region. The 4% annual growth projected for new housing units in North America through 2021 will be driven by above average household formation in Mexico as well as strong construction activity in the US. This is a result of the Global Housing Outlook, 7th Edition, a new study from The Freedonia Group, a Cleveland-based industry research firm.

The size of an average North American housing unit is forecast to grow to 145 square meters in 2021, making North America’s existing floor space the second largest, behind only the Asia/Pacific region, which had nearly six times as many housing units as North America in 2016.

China and India will continue to dominate the global housing market through 2021, representing a combined share of 43% of all new housing units. Growth will be supported by above average gains in residential building construction, particularly in India, where growth is projected to be more than double the global average. Following declines during the 2011-2016 period in China large-scale urbanization projects will promote the rebound of new multifamily housing units. 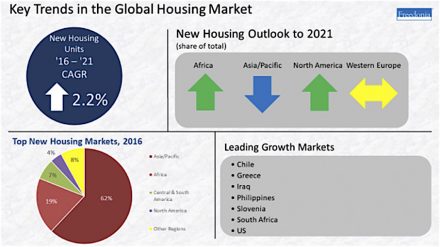 Across much of Western Europe, home prices are reaching record levels and growing at an unsustainable pace. Many governments in the region are enacting measures to curb price growth in order to avoid the potential pitfalls of similar market conditions that contributed to the global financial crisis. Fueling worries, Germany’s central bank estimated in early 2017 that the housing market is overvalued by as much as 30%; in 2016, the nation accounted for 19% of the EU’s outstanding mortgage value.

In Sweden, average housing prices grew 15% between 2015 and 2016, faster than any other EU country, and household debt as a percentage of income reached 350%.

To mitigate fears, Denmark and Norway enacted policies to restrict mortgage lending. In Spain, the economic recovery inches forward after years of downturn, as average housing prices increased for the first time in eight years in 2015 and foreclosures fell by over 30% in 2016.