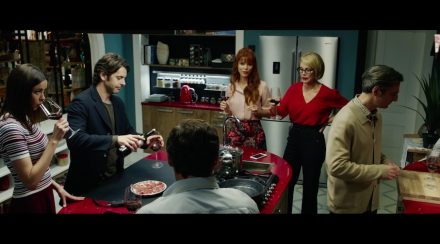 Cosentino’s Silestone is conspicuous in the new film „Perfectos Desconocidos“ by director Álex de la Iglesia. The red countertops on the kitchen island and on boards at the walls give a feeling of the raising tensions between the characters, according to the company’s press release. „Everybody has a secret life“ is thus the subtitle of the drama.

The film is a remake of „Perfetti sconosciuti“ (2016) by Italian Paolo Genovese.

The material used for the countertop was Silestone Eros Stellar. It has an intense red with tiny pieces of glass and mirror, integrated into the surface.

Product placement is the name of that type of marketing. In the 1930s film producers accepted payment for intentionally integrating products into the action. Well-known examples are James Bond’s sporting car or cowboys smoking and showing the cigarette box.

Santiago Alfonso, Vice President of Marketing and Communication of Cosentino Group: „For a brand like Silestone, present in millions of cuisines from five continents, it was of great interest to be part of the kitchen as the central space of the house.” 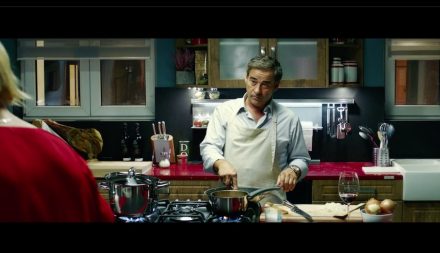 Ana Bustamante, responsible for Commercial and Product Management of Mediaset Spain: „It was very easy to achieve their integration in a natural way, forming part of the frames in a perfect association of content and brand that will undoubtedly generate notoriety … that will help it to reach its target audience through cinemas and other means.

„With this collaboration, Cosentino and Silestone once again reaffirm their support for Spanish culture and cinema, as done in 2008 with the film Rivales by Fernando Colomo or in 2011 with the documentary Mugaritz BSO by Felipe Ugarte and Juantxo Sardon”, according to the press release. 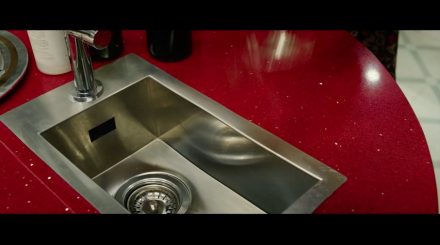