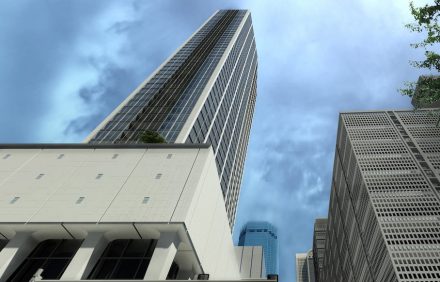 The 52-story hi-rise had been played a TV-role as home to fictitious Ewing Oil company and J.R.

Unusual is the restoration of The Drever hi-rise in Dallas, Texas: the stones from its marble façade are being sliced and then fixed on a honeycomb porter before reinstallation on new anchors. The surplus from this treatment will also be used as terrazzo inside the building.

The marble from the construction of the 52-story-tower in the early 1960’s originates from a quarry in Mount Pentelikon, a mountain range located in Attica, Greece. From the same site came the stone used for the Parthenon of the Acropolis.

For the restoration process, before being taken down, each of the marble panels is documented and numbered.

„The process will allow this irreplaceable stone to not only be restored to its former glory but remain as a sound element of the building’s structure for many years to come,“ says Steve McCoy, president of Drever Construction Co. „The fact that the team was able to find a way for the excess marble to be repurposed adds another layer of history to this already impressive structure.” 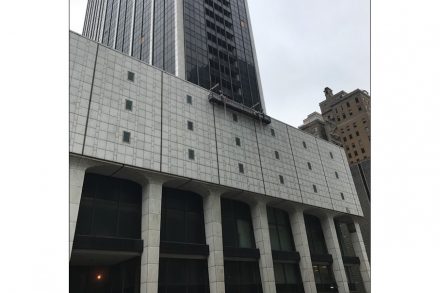 The building once was the home of First National Bank of Dallas. In those times, its façade was often compared to the pin-striped fabric of a traditional banker’s suit because of the repeating pattern of white marble and dark gray floor-to-ceiling windows.

The condition of the panels and the integrity of the building’s engineering necessitated the decision to refurbish the stone. 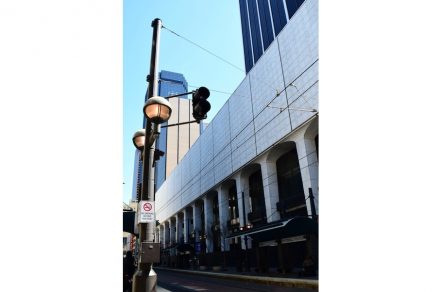 HyCOMB USA is responsible for the stone cutting and the application of the new structural aluminum honeycomb panel. Besides creating extra marble slabs for the building interiors, marble remnants from the cutting and cleaning process will be crushed and repurposed into terrazzo to be utilized in the elevator cab floors, elevator lobby flooring, and flooring on the 9th floor amenity deck. 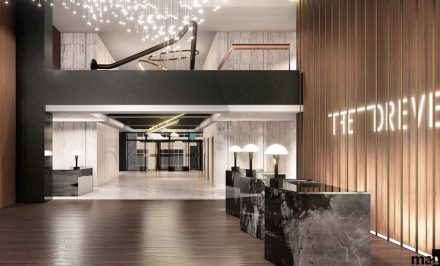 The skyscraper had been originally designed by architects George Dahl and Thomas E. Stanley and has been home to Hunt Oil, the Dallas Petroleum Club, and the fictitious J.R. Ewing’s staged office set for Ewing Oil in the television hit program, „Dallas”.

The $380 million project is the largest and most expensive such development ever in Dallas, the Dallas News reports.

The architects and contractors for the restoration project are Dallas-based Merriman Anderson/Architects and Andres Construction.

The building is scheduled to reopen in 2019.