Hama Lohrmann: stone, wood, clay or plants brought to order by human standards – for a time 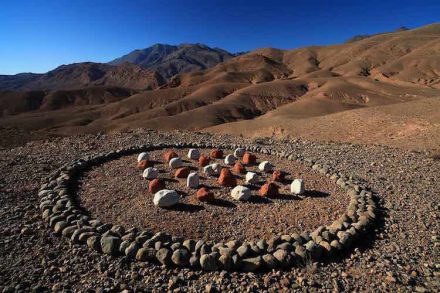 Should you, dear reader, when walking through a distant piece of land, come across unusual stone arrangements, pieces of wood or plants, don’t immediately think of aliens. Ask rather, if Hama Lohrmann was at work and took a hike.

But definitely take a picture. The work of the LandArt sculptor concentrates on the past and on non-possession.

If the material of choice was not stone but rather wood, clay or parts of plants, it is well possible that the art will soon be a thing of the past.

Hama (Hans-Martin) Lohrmann, carpenter and extreme mountaineer likes to wander to where the wayfarer often fades in the distance.

This is where he enjoys pristine nature: one might venture to say that he enjoys the disorder of natural landscapes. Natural chaos, or better nature’s seeming chaos, inspires him to collect material and arrange it temporarily in a manner pleasing to the eye. 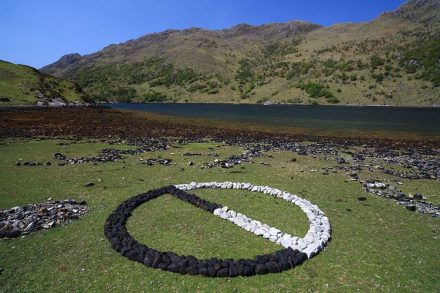 Simple shapes, usually lines or circles are those which he gives a sense of order. „Order“ is what he calls his special type of art.

Usually he needs but one day for his work, not least because in the afternoon he takes the time to make photographs of his art. Documentation is the finisage to his work.

The rest is taken care of by wind and weather, heat and cold: „Returning a work of art to nature, to the natural order or disorder is part of the artistic concept and needs no assistance on my part,“ he writes.

By now he has collected a myriad of „orders“ from Island to the Swiss Alps or to Asia, some 500 of which are in stone.

He almost always collects on site. Seldom are pieces picked up along the way like rowanberries or earth pigments.

Color plays an important role in his „order“. „Because with it I can accentuate my work,“ he writes. 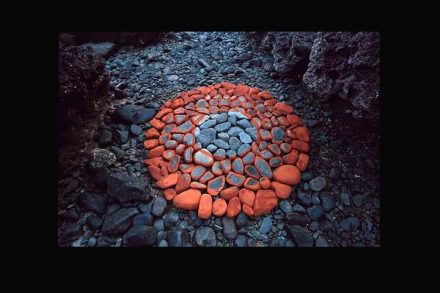 He does not seek to convey a message – of course ephemeral works are unsuited for eternity. At most it is his aim to enhance sensitivity or joy at perceiving his „order“.

He is less restrained by the conceptual distinction to conventional art. He loathes the exploitation of art by artists – which is why his works of art are outdoors and not permanent.

But he is willing to compromise: in Bonstetten near his home town Augsburg in proximity of Munich he set up an average of 3 art works a year. The municipality used the nine examples of LandArt for marketing purposes and Hama Lohrmann himself occasionally offers presentations and guided tours.

His webpage also refers to some indoor works of art.

He „still enjoys working as a freelance carpenter“, he writes. „Economic security was not at the center of my focus in life. Perhaps this is unwise and will bear repercussions, but that’s life,“ he remarks.

His webpage shows collections and calendars with photos of his works.