Discovered in the Eastern Mongolian steppe: monument with 14 stone pillars and a sarcophagus in the middle 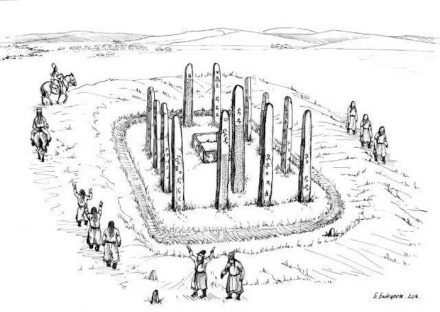 A joint excavation team from Osaka University and the Institute of History and Archaeology of the Mongolian Academy of Sciences discovered the ruins of a unique monument surrounded by 14 large stone pillars with Turkic Runic inscriptions arranged in a square on the steppe called Dongoin shiree in eastern Mongolia during their three-year (2015 ~ 2017) joint excavation.

Turkic people are groups who settled from Eastern Europe to Western Asia and North Africa. Nowadays, countries like Turkey, Iraq, Uzbekistan and Mongolia are spread over the vast region.

Before the investigation of the ruins began in May 2015, intellectuals involved had thought that inscriptions and ruins of Turkic royalties were only on the steppes in the western part of Ulan Bator, the capital of Mongolia (Figure 2).

However, this excavation team led by Professor Takashi Osawa at Osaka University discovered 12 new inscriptions at the site, obtaining clues for clarifying power relationships in eastern Mongolia in the Middle Ages from the contents of the inscriptions and the stone configuration at the monument. 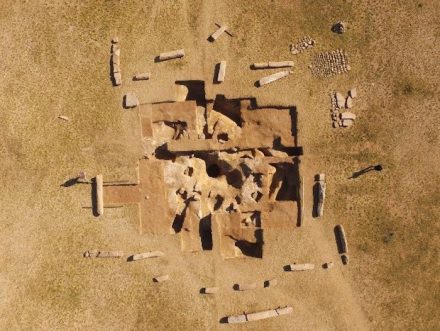 The major feature of the monument is its structural configuration in which the stone sarcophagus at the center of the mound, where a deceased person might be placed, is surrounded by 14 stone pillars with inscriptions (Figure 3).

On ever stone inscription, tamga (signs) of the ancient Turkic tribes are carved more than 100.

These excavated inscriptions are some of the largest Turkic inscriptions discovered in Mongolia. Using radiocarbon dating of pieces of calcined coal, sheepskin, and horse bone excavated from the sarcophagus, it was estimated that this unique monument was built in the 8th century, during the late Second Ancient Turkic Qaghanate.

Professor Takashi Osawa deciphered these inscriptions and found that the person who is buried and commemorated in the inscriptions assumed the position of Yabgu (viceroy), the highest ranking just behind Qaghan, during the reign of Bilge Qaghan (716-734 AD) of the Second Turkic Qaghanate.

Qaghan (or Khagan) is a title of imperial rank in the Turkic and Mongolian languages equal to the status of emperor, and is someone who rules a Qaghanate or Khaganate (empire).

It was also found that the Yabgu became a Tölis-Shad (Royalty of the East), a commander in chief and highest administrative officer, in eastern Mongolia during the reign of Tengri Qaghan (734-741 AD). 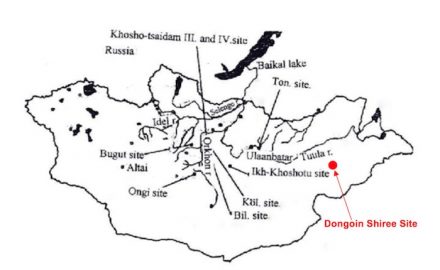 These findings show that the Dongoin shiree steppe, where the monument ruins remain, was the center of the eastern area of the ancient Turkic Qaghanate, whose location was not known from materials written in Chinese and Turkic texts.

This monument will reveal that power relationships of rulers in the east area of the Turkic Qaghanate and their territories as well as their political and military relationships with Mongolian tribes, such as the Khitan, Tatabi, and Tatar.

In addition, the arrangement of these stone pillars on the plateau will also provide important information for discussing the religious ideas and world outlook of the ancient nomads.