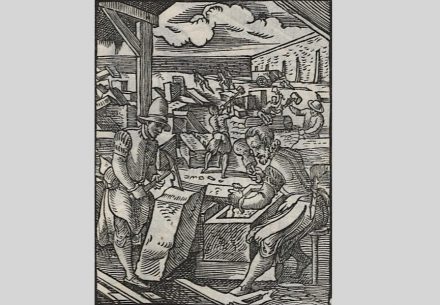 Next to bread, beer was a staple food on the island / women brewed their own and had special drinking rounds

16th century Irish stonemasons downed an average of 14 pints of beer or some 7 l a day. The aim was not so much getting drunk but rather taking in sustenance. Dark ale and light beer were, after all, a staple food of the island inhabitants.

Dr. Susan Flavin of the Anglia Ruskin University analyzed the nutritional landscape of Ireland based on household books, rations reports for soldiers and mariners’ books.

One document dated 1565 shows that stonemasons in a Clontarf quarry were rationed 14 pints of ale a day. The ration was allotted, somewhat surprisingly, by a representative of the Christ-Church-Cathedral in Dublin.

Perhaps he needed stone for a building project or his own.

The same results were attained by scientists in England.

Not only was the beer strong, it also had high nutritional value of some 400-500 calories/pint as opposed to 180-200 calories today.

Beer was also used as a means to reward workers for a job well-done. Dublin stone masons who had worked hard or very efficiently, demanded and received a better quality of beer, perhaps comparable to export beer or stout.

Stout was a luxury commodity and distributed mainly to the heads of households or higher class.

And finally: women played an important part in the bier world: when the proctor of Dublin’s Christ-Church-Cathedral was out of ale, he turned to a lady by the name of Meg Hogg who’s beverage gained fame as „good ale“.

The ale was brewed at home and this was women’s work as Dr. Susan Flavin discovered. And it was the norm that the ladies including the entire brood of children found their way to the construction site where the menfolk were finishing work for a drink.

The castle of Dublin even had „drinkings“, where only women were allowed to enter.