NEOM on the coast of the Gulf of Aqaba: Saudi Arabia is planning the future 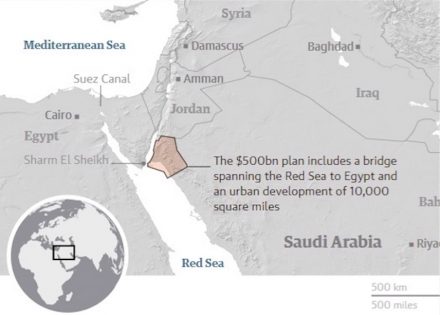 According to the roughly outlined future building codes, natural stone should find ample implementation in NEOM, Saudi Arabia’s current mammoth project: talk is of „building codes that make net-zero carbon houses the standard“ in a press-release by Crown Prince Mohammed bin Salman bin Abdulaziz Al Saud, who presented the project to the public in October 2017.

After all, marble, granite, etc., are there for the taking and require no primary energy for production. Transportation costs also remain at a minimum: from Egypt to Palestine, from Jordan to Oman, and even in Turkey, this part of the world calls a multitude of quarries and stone production sites its own.

NEOM is poised for growth in north-western Saudi Arabia, specifically on the banks of the Gulf of Aqaba adjacent to Egypt’s Sinai Peninsula and with Jordan to the north. Portions of the project are to extend to these two neighboring countries. Along the 468 km coastline and over the 2,500 m high mountain range there was little of economic interest in the area to date.

The terrain is ideal for unhindered planning inspired by imagination. NEOM is to extend across 26,500 km², an area roughly the size of the US-State of Massachusetts.
The vision, too, holds great promise: namely „to write humanity’s next chapter“, according to the video on the project’s webpage.

A few slogans in the project description: Energy will be supplied by sun and wind, everyday life will be organized digitally, robots will take on routine jobs and production will be ecologically friendly.

NEOM will become home to the world’s best and brightest and harbor innovative production and development of biotechnology, mobility, energy and water, media and entertainment, food, technological and digital sciences as well as advanced manufacturing.

„A constant breeze leads to mild temperatures“, the press-release assuages skeptics.
A political aspect is worth noting: „NEOM is developed to be independent of the Kingdom’s existing governmental framework, excluding sovereignty“, cryptically formulated. The press suspects that the Crown Prince will pave the way for a modern and liberal Islam.

Some 500 billion US-$ have been earmarked to finance the project in the next few years. The funding is supplied by the Saudi Arabian Public Investment Fund and private investors.

NEOM is part of „Vision 2030“, the National Transformation Plan. After that, the kingdom will divert profits from its oil trade to support the economy, attract international experts and corner the international markets for high-end products.

The venue on the Gulf of Akaba is favorable: according to a NEOM-press-release, some 10% of international trade pass through the Suez Canal and the Red Sea. 70% of the word population could be reached by air from the Gulf with 8 hours or less.