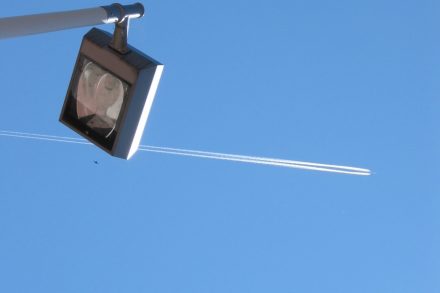 Australia, the USA and Canada lead in growth as most popular for new arrivals

The market research group New World Wealth is currently analyzing migration trends of millionaires and billionaires by country and city respectively in its „Global Wealth Migration Review“. The review also includes data on the ebb and flow of wealth in these countries.

HNWI in the table stands for High Net Worth Individuals, an acronym for persons with a net value of over 1 million US-$. Some 15.2 million of them currently populate the Globe. 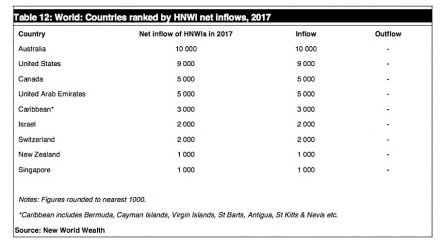 Australia, the USA and Canada lead in growth as most popular for new arrivals closely followed by Cyprus, Luxemburg, Malta, Mauritius, Monaco, Portugal and Spain with over 100 new HNWI’s. 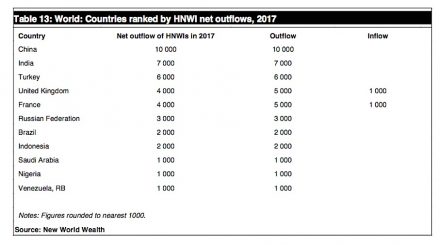 Countries with the greatest loss of HNWI are led by China despite predictions of sustained financial growth in the next decade. The same holds true for India.
Note that the researchers also incorporate factors such as sense of security in their analyses. Levels of income tax are also a deciding factor, according their publication.

New World Wealth is a market research enterprise with headquarters in Johannesburg, South Africa. By self-acclaim their summary renders a more accurate picture of the economic situation of a country than the Gross Domestic Product (GDP).

One of the researchers’ main arguments is that when the wealthy settle in a country, it is an indication for good prospects in marketing and standard of living.

They analyzed facts and figures of over 150,000 HNWI’s world wide from their own data base, interviews e.g. with financial advisors, stock exchange specialists, traders of luxury goods and visa officials for immigration, to name but a few.

According to the study there are some 584,000 nearly multi-millionaires with a net value of +100 million US-$ and 2,252 nearly-billionaires (net value of + 1 billion US-$). The study includes information on the most frequented hotels, leisure activities and automobile markets.

Another point in the analysis is the wealth gap in a given country. Some countries show a significant gap between rich and poor – a factor not necessarily present in capitalist countries. Countries with the smallest gap are Japan, New Zealand, Norway, Canada, Germany Sweden, Denmark, South Korea and Finland.