In the middle of Basel’s St. Jakobshalle Arena lobby lies a large erratic block which seemingly supports the roof 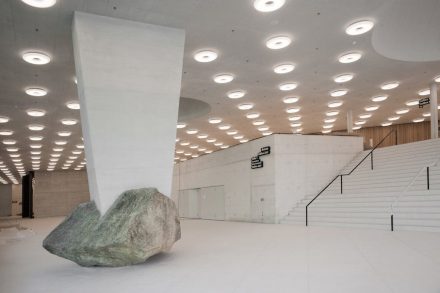 Many a story revolves around Eric Hattan’s work of art

Visitors to Basel’s St. Jakobshalle Arena lobby may enter with the aim of attending a concert or seeing an exhibit. But the first thing to catch their eyes will be the erratic rock which seemingly grows out of the roof support.

The impression is not entirely false – erratic rocks are common in Switzerland and a wide roof needs support. But on the other hand, it is a fake: erratic stone does not grow out of concrete (not a crack or mortice to be seen) and the construction alone including technology level at 2,800 t cannot be supported solely this way.

It is, of course, art. And its title is part of the creative process: „Unverrückbar” (Unmovable) by Eric Hattan. The artist lives in Basel and Paris. He was the winner of the competition choosing a work of art for the lobby of the Arena.

Let us start by revealing the technology behind the work created by Schnetzer Puskas Engineers: the center of the concrete support is a steel beam, one end of which pierces the stone ending in a sort of dish. The pieces are bound together in such a way that minimal shockwaves or earth-movement are absorbed.

But: this information is also not complete.

It is the unusual shape of the concrete support which seems to send the laws of physics topsy-turvy. The keystone is at the bottom of the construction where the pillars are thinnest. 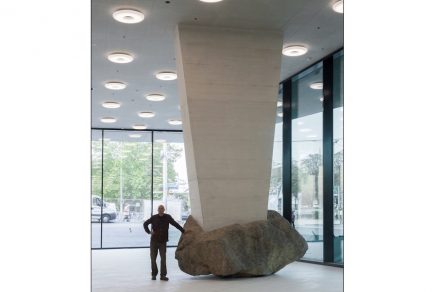 It is a game of wits which confuses the beholder: unlike the stone, what with its 24 t-mass, which is practically unmovable, the rest of the construction seems entirely upside down.

At least in one’s mind’s eye, there seems to be ample movement in the work of art.
The juxtaposition of stone, a product of mother nature and concrete made by man also are set to confuse: the erratic stone originates from the Gotthard Massif, one of the most ancient stone formations on Earth with millions of years under its proverbial belt. So, the beholder will probably wonder how much time the St. Jakobshalle Arena, built in 1975 and its restorations and extensions have to go.

And the erratic stone has come a long way: transported by glaciers from the Gotthard Massif to what we know as the Aargau today and polished along the way. This is where it lay in a sand pit until Eric Hattan discovered it and organized the transport to Basel. The artist had previously made several futile attempts at finding a stone of this size.

So, it was a stroke of luck that Eric Hattan worked in cooperation with the architect and the municipality: the competition was announced early enough to have the boulder transported to the scene of the art work before construction was set to begin. In any other constellation it would have been impossible to integrate a block of this size in an existing construction.

But the boulder still has ties to the mountains: „Moss and earth still clog its pores“, writes the Basel-City homepage.