Development over the past 120,000 years: gigantic cold-water coral reef in the deep see along the coast of Mauretania 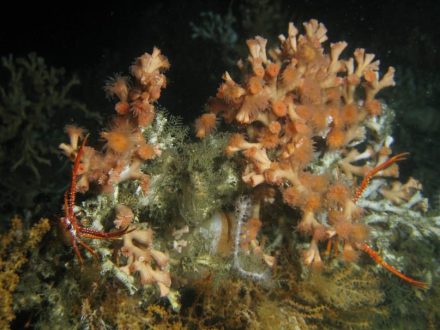 With a length of around 400 kilometers, the world’s largest contiguous cold-water coral structure stretches along the seafloor off the coast of Mauretania. An international team of scientists from Germany, Italy, France, Sweden und the USA has studied how these cold-water corals developed over the past 120,000 years.

In contrast to tropical corals, which live in shallow waters bathed with light, cold-water corals are found in water depths of hundreds or even a thouand meters. More than half of the known coral species living today exist in complete darkness in the deep sea.

They too build impressive reefs.

The cold-water coral species Lophelia pertusa is a key contributor to the reef formation. It belongs to the group of stony corals and forms highly branched, bush-like colonies. Where many of these colonies coexist, reef-like structures form, providing a unique habitat for various other species such as soft corals, fish, crabs and sponges.

Along the coast of Mauretania, the coral mounds can reach heights of 100 meters. „Actually, one could describe this as a cold-water coral underwater mountain range,“ says Dr. Claudia Wienberg of MARUM – Center for Marine Environmental Sciences at the University of Bremen. „Off Mauretania individual cold-water coral mounds have presumably grown together over time. There is nothing like this anywhere else in the world ocean.” 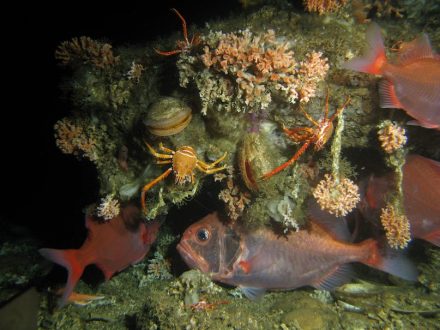 The international scientists investigated how these cold-water corals developed through the past 120,000 years. There have been repeated phases in the past when the growth rates reached peak values of 16 m per 1000 years. Not even the largest present-day cold-water coral reef off Norway is growing that fast.

Yet almost 11,000 years ago the growth of the Mauretanian coral mound stagnated. At this time the living corals probably completely disappeared from the mounds. Only today individual living cold-water corals are beginning to appear again.

The coral growth depends on various environmental factors such as water temperature, oxygen content, food availability and the prevailing currents that transport food to the sessile cold-water corals. Among the influencing factors, the researchers identified the low oxygen content of about 1 mm per liter of water as being critical.

The results suggest that the peak phases for the cold-water corals, when the mounds grew significantly in height, coincided with times when oxygen-rich water masses flowed into the area from the north.

According to Wienberg’s theory, the corals found refuge at times of extremely low oxygen content in small ravnes between the large mound structures. Today, many more such corals can also be found in these canyons than on the mounds.

„Scentific prognoses suggest that zones of depleted oxygen in the world ocean will continue to expand,“ says Wienberg. „Even though cold-water corals exhibit a high tolerance, this is definitely a deciding stress factor for these deep-sea ecosystems. Added to this are the rising water temperatures caused by climate change and increasing ocean acidity.“