World Stone Congress at the Xiamen Trade Fair: product design made with stone rather than stone objects 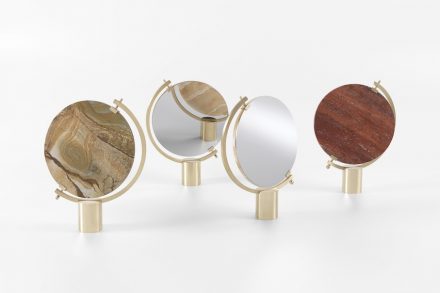 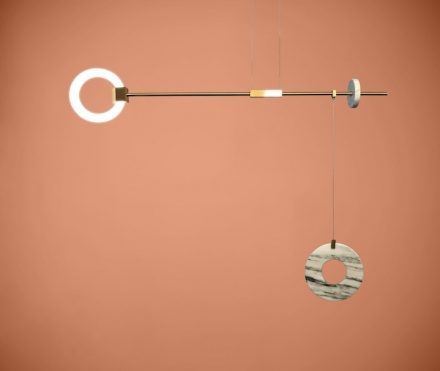 Stone-Ideas.com’s Peter Becker gave a talk on ways and means to help the branch out of the design-doldrums

Back to back to the stone fair, Xiamen’s World Stone Congress has become an important stop for the stone exhibition. At the Design Forum held on day 2, Peter Becker held a talk on Design with Stone instead of Stone Design. Stone-Ideas.com publishes pertinent excerpts.

Other speakers were the Greek designer Chris Basias and representatives of the US-based Coldspring Company both of which will be the object of articles in the near future.

After half a century since the idea was born in the 1960’s, natural stone as a household product has bogged down and seems stuck in the doldrums of design. The problem is, that key players are constrained by their stone sculpting tradition, e.i. creating merely aesthetically pleasing shapes of massive stone.

But stone is a tricky medium and can easily render a product useless. Product design relies fundamentally on impeccable function. 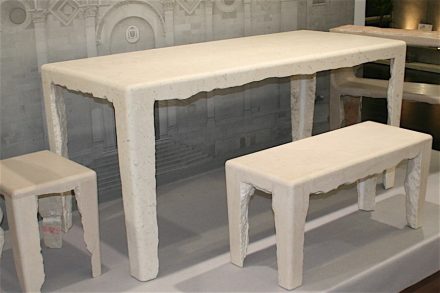 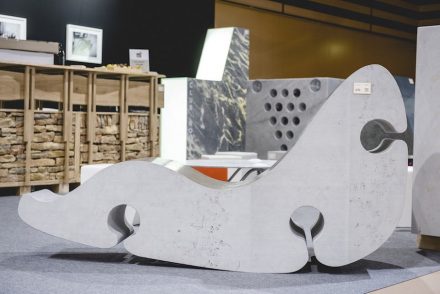 Sculptors’ design products are, as a rule, neither useful nor marketable.
Also, the designer’s possibilities are radically reduced, which is why there is a high degree of repetition in designer objects submitted in competitions.

Those in doubt, are invited to peruse the „Design“ section of Stone-Ideas.com where new objects on the market are compiled.

But there are exceptions with a common denominator: they all use natural stone as part of the object. We call this „Design with Stone“. The two items at the top of the page are a good example. And they have a market.

Interestingly, „Design with Stone“ is not new by any means. Ever since the 1960’s household items have appeared on the market alongside design sculptures. 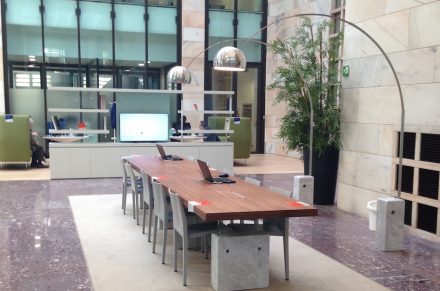 A case in point is Achille Castiglioni’s „Arco“ lamp: stone delivers what it does best, namely providing a counterweight for the wide arch – and it is elegant at the same time.

The designer withstood the temptation of adding a lampshade in ultra-thin stone.

That is why to this day „Arco“ is timeless and still sells in endless varieties.

The object is to use stone for what it can do best, an implementation in keeping with its properties.

One might interject that the point has often been to show what stone can deliver.

But it’s time to stop experimenting. Time for games on the playground are over and designers and soliciting companies need to grow up and develop marketable products.

The many senseless objects found in the section of our magazine are bad news for marble, granite and the like.

And because so much nonsense is being shown at natural stone fairs, many architects give it a wide berth. 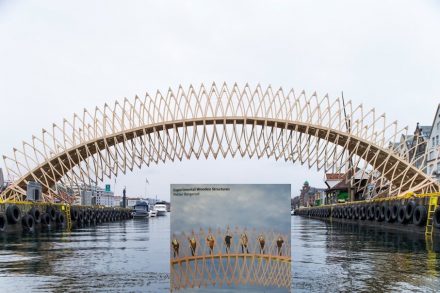 Just one glance at another branch: producers of wooden furnishing also experiment with their product. But it goes without saying that these objects are invariably useful and practicable.