Nasa’s InSight mission on its way to Mars 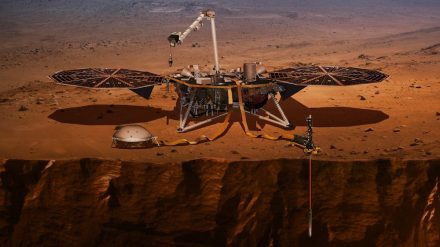 Since May 05, 2018, 13:05 CEST, Nasa’s InSight mission is on its way to the Mars with an Atlas 401 rocket launched from the Vandenberg Air Force Base in California. It is a geophysical observatory which will land just north of the planet’s equator, on the Elysium Planitia plain, on 26 November 2018, having traveled for half a year, covering almost 500 million kilometers. As one of the experiments, the small HP3 penetrometer will hammer into the Martian surface. During 2 years it will provide data about the temperature gradient in the subsurface. Other experiments will register seismic waves coming from inside the planet or from impacts of celestial bodies.

Scientists want to understand how the interior of Mars developed, whether it still has a hot, liquid core, and what makes the Earth so special in comparison.

The researchers hope to get a more accurate picture of the interior of Mars and thus decipher its past. This will help to better understand the evolution of Earth itself and of Earth-like planets in the Solar System and other planetary systems.”

HP3 experiment was developed by the German Aerospace Center (Deutsches Zentrum für Luft- und Raumfahrt; DLR). The mechanism will measure the subsurface temperature and thermal conductivity. In its core, it holds a 40-centimeter-long hammering probe with a diameter of 27 millimeters – nicknamed „the Mole“ by the scientists. Powered by an electric hammering mechanism, it will burrow its way centimeter by centimeter into the surface of Mars over a period of several weeks.

On its way to a maximum depth of 5 m, it will install a cable measuring the temperatures down there. Its sensors are built to register temperature differences of a few thousandths of a degree Kelvin.

The InSight mission is being conducted by the Jet Propulsion Laboratory (JPL) in Pasadena, California, on behalf of NASA’s Science Mission Directorate. DLR is contributing to the mission with its HP3. Industry partners Astronika, CBK Space Research Centre, Magson and Sonaca are. The Space Research Institute at the Austrian Academy of Science is a scientific partner for the project, among others.