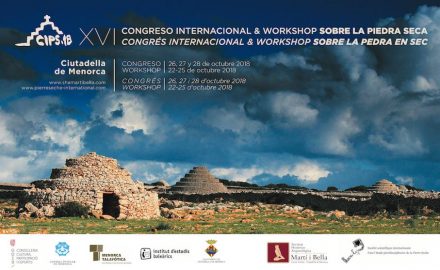 At the Ciutadella de Menorca, October 26 – 28, 2018, the 16th international congress on drystone walling (CIPS 18) will be held. Before, in about 2 km distance, an International Workshop of Professional Wallers will start the restoration of a typical Balearic peasants’ shelter.

The main goals of the Congress are to spread the knowledge acquired in drystone construction considered as a traditional craft; to develop research as well as practical work in this field and to facilitate the exchange of experiences related to good practice in the building and maintenance of drystone work.

Participants will be specialists and people interested or involved in:
* research in Anthropology, History, Geography, Agronomy, Earth and Nature Sciences, Architecture, Engineering, Archaeology.
* drystone techniques as applied to the construction and planning of the landscapes.
* the study and evaluation of heritage buildings, landscapes, environment.
* the development of green and / or cultural tourism.
* Training craftsmen and the advice of people accustomed to using drystone in their work.
* the representatives of the specialized press, and of prestigious institutions such as ICOMOS, UNESCO, University Institutions, Ministry and Cultural Councils. 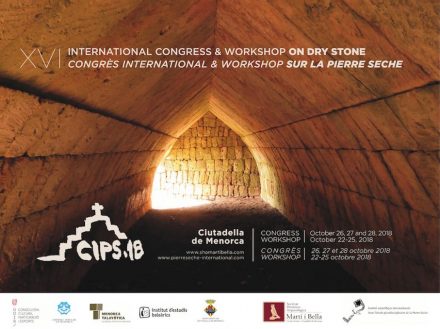 In the workshop from October 22 – 25, 2018, the „Es Pinaret“ Barraca will be restored. It is a traditional peasant animal shelter typical of the Balearic region, located 2 km from the city of Ciudadella in a wooded park. The project will be an opportunity to discuss the practices and experiences of the wallers of the island of Menorca and the craftsmen from other countries.

The documentation shows the various steps of repairs planned for the Barraca. The internal built structure of it is still good. Yet there are to be restored degradations at the outer envelope of the steps, on the upper part of the corbelled vault and on the jambs of the entrance door.

Two Menorcan professional wallers will guide the work and help discover the traditional building techniques of the region. On Friday, 26th, the Congress will start by visiting the site and examining the work done.

The General Assembly of the 15th ICLS held in Kefallonia appointed Ciutadella de Menorca as the venue for the 16th International Congress of DryStone, to be held in 2018, and Martí i Bella Archaeological Historical Society (SHAMB),
as the organizing entity.