Reading in chert tools: Ötzi was probably socially isolated and in serious trouble 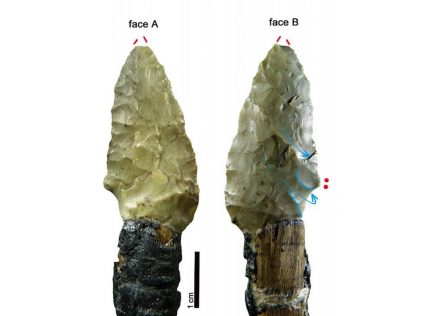 Stone tools from early ages of mankind can bear surprisingly detailed information – even without inscription. Research done by Ursula Wierer from the Soprintendenza Archeologia, Florence, Italy, and colleagues on the Iceman Ötzi’s toolkit reveals that he must have been in serious trouble during his last days, probably had been expelled from his community and maybe without any contact.

The mummy from the bronze age had been found in 1991 by hikers at the Tisenjoch in South Tyrolia, Italy at a glacier at 3200 m height. Ötzi had died some 5300 years ago.

In a new phase of research, scientists analyzed the tools of the iceman all made from chert or related to chert working: dagger, two arrowheads, endscraper, borer, small flake and antler retoucher as well as the arrowhead embedded in the shoulder of the mummy. They studied the raw stone material, inspected the use-wears and compared the findings to other ancient objects from the region. CT scans and 14C dating was also done, among other scientific methods.

Not so much surprising was the fact that the chert of Ötzi’s stone tools came from a region with a range of about 70 km in Southern Tyrolia. It had been known before that trading of flintstone was a widespread business all over the Alpes and Europe. Stones with special qualities were even transported over long distances.

Yet Ötzi’s tool-kit was in an extremely bad shape, according to the study published in the magazine PLOS One. They were:
* a resharpened small dagger with a broken tip;
* an almost worn out blade tool, intensely used as a knife and freshly resharpened at its distal end;
* a freshly retouched borer, from a previous retouched blade;
* no dedicated strike-a-light, but a possible expedient use of the endscraper and point for such purpose;
* only one small flake, though very sharp and easy to carry, instead of having a handful of them;
* only two arrowheads (already resharpened one or more times) both with broken tang but no flake blanks for making new ones, despite possessing a functioning retoucher.

„This means that Ötzi had not had access to chert of any kind for quite some time, neither from outcrops nor from a specialized flint-knapper workshop.“

Maybe to solve this crucial problem, he had climbed down to lower altitudes of 1200 m – but could not refill his inventory there because he was socially isolated.

„The Iceman was therefore in a critical situation when he returned to the mountains … and reached the Tisenjoch. The lethal arrow which hit him from behind, shot by a Southern Alpine archer, was therefore only the last in a series of difficulties he had to face, and which also left traces in his lithic toolkit,“ is said in the conclusion of the report. The entire report can be read for free online.

The research was supported by the South Tyrol Museum of Archaeology and by the Department of Innovation, Research and University of the Autonomous Province of Bozen/Bolzano.