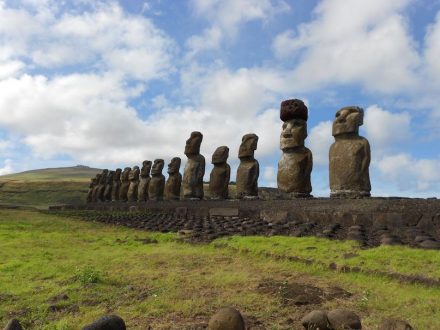 The raw cylindrical forms were rolled to the sites and put in place by parbuckling / „Rapa Nui people made remarkable achievements through their ingenuity,“ a scientist concludes

Update: New study shows that Easter island’s society might not have collapsed

The ancient people of Easter Island, or Rapa Nui, were able to move the massive stone hats and place them on top of statues with little effort and resources, using a parbuckling technique, according to new research from Binghamton University, New York, and Penn State University.

The massive statues themselves, called moai, were carved from volcanic tuff and came from a quarry on the island. Yet the hats (pukao), made of red scoria, had to be transported from another site 7.5 miles away on the first quarry.

Quite well understood is how the transportation of the statues which can be up to 33 feet tall and weigh 81 tons. They were brought into place along well-prepared roads using a walking/rocking motion, similar to the way a refrigerator is moved.

Not all statues made it to their final locations, and the fallen and/or broken ones showed that, to move them, they were carved so they leaned forward and were later leveled off for final placement.

Tackling the issue of the hats (with diameters up to 6.5 feet and weighing 13 tons), the team around Carl Lipo, professor of anthropology at Binghamton University, took photos of different pukao and used them to generate three-dimensional models that document details that might be important for identifying the most likely method of transportation.

„We assumed they were all transported and placed in the same way,“ explained Sean Hixon, lead author of the study published in the Journal of Archaeological Science and current graduate student at Penn State University. „So we looked for features that were the same on all the hats and all the statues.“

The only such features were indentations at the bases of the hats, and these indentations fit the tops of the statues’ heads. If the hats had been simply slid in place on top of the statues, then the soft stone ridges on the margin of the indentations would have been destroyed. So the islanders must have used some other method.

Previous researchers suggested that the statues and the hats were united before they were lifted in place, but the remnants of broken or abandoned statues, and other evidence for walking the statues indicates that the hats were most likely raised to the top of standing statues.

„The best explanation for the transport of the hats from the quarry is by rolling the raw (cylindrical) material to the location of the statues,” said Lipo. „Once at the moai, the pukao were rolled up large ramps to the top of a standing statue using a parbuckling technique.“

Parbuckling is a simple and efficient technique for rolling objects and is often used to right ships that have capsized: The center of a long rope is fixed to the top of a ramp and the two trailing ends are wrapped around the cylinder to be moved. The rope ends are then brought to the top where workers pull on the ropes to move the cylinder up the ramp.

Besides reducing the force needed to move the hats, this arrangement also makes it easier to stabilize the hat on the trip up because the hat typically will not roll back down the slope. Probably 15 or fewer workers could move the largest preform hats up the ramps.

Once the piece was at the top of the ramp, it could not simply be pushed into place because of the ridges on the margin of the hat base indentation. Rather, the researchers believe that the hats were tipped up onto the statues.

First, the hat would be modified to its final form, some including a second, smaller cylindrical piece on top.

The hats could be rotated 90 degrees and then levered up with small wooden levers to sit on the statue tops, or the ramp could be slightly to the side, so that rotation in the small space at the top of the ramp would be unnecessary. Then the hat would simply be levered and pivoted on edge and into place. 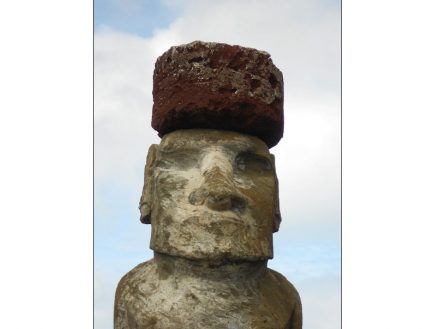 The ramps were then disassembled and became the wings of the platform surrounding the statues.

„Easter Island is often understood as a place where prehistoric people acted irrationally, and that this behavior led to a catastrophic ecological collapse,“ said Lipo. „The archaeological evidence, however, shows us that this picture is deeply flawed and badly misrepresents what people did on there, and how they were able to succeed on a tiny and remote place for over 500 years.“

„Our analysis of pukao adds significantly to a new understanding of the island: Rapa Nui people made remarkable achievements through their ingenuity,“ said Lipo. „These efforts were embedded in a sustainable social system in which monument construction (such as the pukao) played a vital role. While the social systems do not look much like the way our contemporary society functions, these were quite sophisticated people who were well-tuned to the requirements of living on this island and used their resources wisely to maximize their achievements and provide long-term stability.“