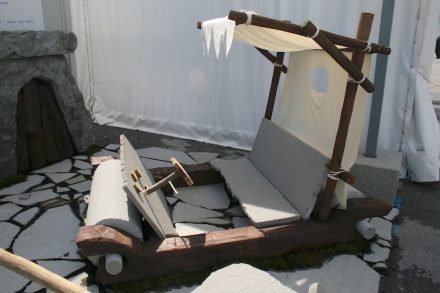 „They possessed similar technological capabilities to modern humans, even though they sometimes behaved differently,“ a Leiden University archaeologist says

Neanderthals were able to make fire on a large scale with the aid of pyrite and hand-axes. This means they could decide when and where they wanted fire. Archaeologist Andrew Sorensen from the Leiden University in the Netherlands has discovered the first material evidence for this in the stone of the hand-axes.

„Late prehistoric modern humans could make fire whenever they needed it,“ says archaeologist Andrew Sorensen. They did so by striking a piece of pyrite – a mineral that contains iron – with flint tools called strike-a-lights.

But there was no evidence their more ancient relatives, the Neanderthals, a long-extinct prehistoric human species, used this technique as well. The general idea was therefore that Neanderthals did not make their own fire, but were dependent on natural fires caused by lightning strikes, for instance.

This idea now appears to be incorrect, at least among some younger Neanderthal groups. Sorensen has discovered that our Stone Age cousins were able to make their own fires and that this practice was widespread.

Together with French archaeologist Emilie Claud and Leiden Archaeology Professor Marie Soressi, he discovered very specific microscopic wear on flint hand-axes (also called bifaces) from the Middle Palaeolithic, the era of the Neanderthals.

Sorensen and Claud studied dozens of hand-axes of about 50,000 years in age from various sites throughout France. They found the same distinctive wear on all of them. „This proves that it was not an incidental find, but that the Neanderthals could make fire on a large scale,“ says Sorensen. And that is of huge significance.

Sorensen explains: „It gives us new insight into the cognitive skills of Neanderthals. It shows Neandertals possessed similar technological capabilities to modern humans, even though they sometimes behaved differently.“