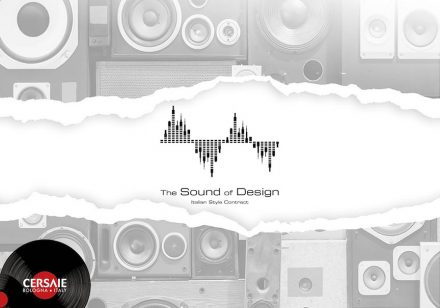 While last year in Hall 30 of Cersaie, famous film scenes had been decorated with Italian ceramic and bathroom furnishing products, in the 2018 edition different sets will be accompanied by a series of songs which became famous between 1976 and 1983. The title of the show is „The Sound of Design – Italian Style Contract“. It will take place at Cersaie, the international ceramic tile and bathroom furnishings show in Bologna (September 24-28, 2018).

„Music and design are both the result of a creative act, they stir emotions and break down barriers,“ say the two curators Angelo Dall’Aglio and Davide Vercelli who with the exhibition aim to demonstrate that while timeless in nature, music and design can equally well adapt to current trends and fashions and become a booster of new ideas.

The soundtrack accompanying visitors as they explore the exhibition will consist of a series of songs released between 1976 and 1983 which have established themselves over the years as timeless icons. That tumultuous period was marked by an unprecedented mix of diverse musical genres such as rock and disco, pop and heavy metal, electro, punk and reggae, ska and hip-hop, an explosion of creativity that was not limited to music but also invaded the world of design.

Previous events had been CerSea in 2014, CerStile in 2015, CerSail Italian Style Concept in 2016, Milleluci in 2017. They had attracted a total of 39,800 visitors and 243 participating companies, according to the fair.

Collaboration with the Bologna Design Week will continue this year, and in the city center a portal publicizing the exhibition will be installed in the Quadrivio (crossroads) in Galleria Cavour.

This year, Marmomac in Verona (September 26-29, 2018) starts 2 days after Cersaie in Bologna. Both cities have a high-speed train connection which takes about 1,5 hours. The return ticket is about 50 €. Early reservation is necessary.