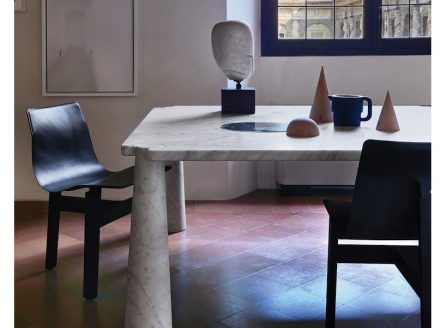 Form alone was what drove him; functionality was secondary, almost negligible

Agapecasa Company introduced its „Mangiarotti Collection“, for which 11 design objects were chosen from the realm of the famous Italian designer (1921-2012). Agapecasa’s technicians made a few „small technical variations“ to meet „the functional needs of our times“ according to the press release. However, the „authenticity“ of the objects was left unscathed.

We grasp this occasion to dedicate a differentiated glance at Mangiarotti’s works in natural stone.

After all, product design, i.e. design meant for mass production, was not his field of action at least not in natural stone.

In fact, Angelo Mangiarotti was always an artist. No wonder then, that he dedicated his energy to sculpting in his final years after having intensively worked in sculpting already in the 1980ies.

When looking at his furniture through the eyes of an aesthetically conscious beholder, one must concede that the works are outstanding. They are impressive shapes with an incredible effect, able to light up an entire room.

However, for household use, many of the pieces are unsuitable. 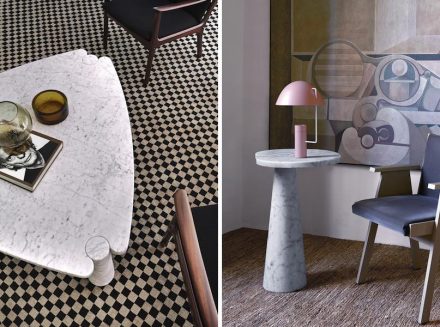 Take, e.g. the table „Eros“. The table top merely rests upon the conically shaped legs. The mass of the marble slab keeps the work surface in place.

But what happens once the table has been cleaned a few times and crumbs and dirt have lodged in the corners? Must one call in a dental technician to clean the cracks with special equipment? 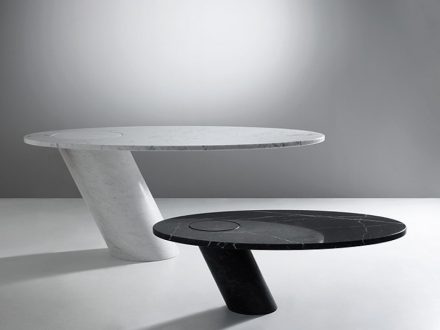 Or the table „Eccentrico“. The idea of gravity holding the construction in place is often praised. It makes the table top appear to float, it is said.

We fear the mass of so much stone. What happens if it slips? Will it crush all that is beneath it? We know that Mangiarotti took measures to prevent accidents by means of a cleverly concealed construction. Details can be looked up in the „Assembly instructions“ online.

But we refer merely to the first impression, the impression which moves the buyer to close a deal or decide against it. 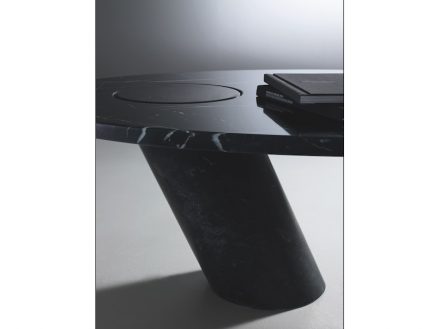 The sheer mass also makes the furniture impractical. The 72 cm high table leg alone weighs in at 204 kg. Add to this 113 kg a table top and you have 317 kg resting on a small oval area.

After installing the table, its sheer mass prevents further movement. Unsightly cleaning marks around the foot are the result.

Most of Mangiarotti’s pieces fail the practicability test. The result is that they were never mass produced. This fact probably did not interest him even very much – yet he was always praised that functionality was so important for him.

Mangiarotti’s art-cum-design has influenced an entire generation of young designers inspiring them to conjure household products made entirely of stone.

This worls only when the mass of the stone supports functionality. The central question of product design, where natural stone is involved, must remain: what can stone deliver and what is outside its constraints?

No wonder then, that natural stone has never moved beyond the realm of luxury objects. That is the conclusion of one of Italy’s own natural stone masterminds: Natural stone design is limited to „the elite niche of small series and one-off-pieces, which are of little importance on the market“, as Vincenzo Pavan put it in the book „Marmo 4.0“ („Marmo 4.0. Sperimentazioni nel design Litico / Experiments in lithic design”, ISBN 978-88-317-2878-2).

Angelo Mangiarotti was an architect, planner, designer and university lecturer. He is considered a „contender of pure functionalism, without losing the view toward elegance and beauty“, according to a press-release by Agapecasa. 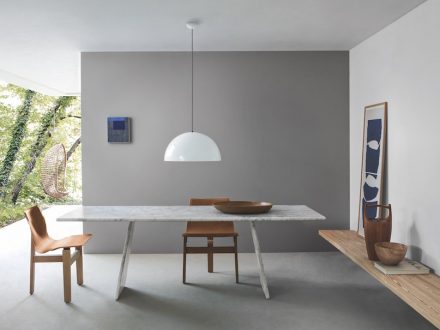 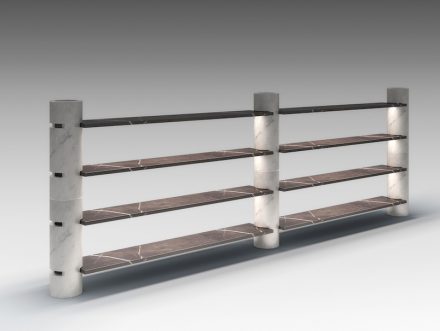