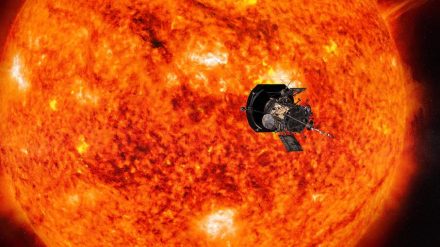 Since August 11, 2018, Nasa’s Parker Solar Probe is on its way to the sun to find out more about something mysterious at the star’s corona: In defiance of all logic, its atmosphere gets much hotter the farther it stretches from the Sun’s blazing surface.

Temperatures in the corona – the outermost and thin layer of the solar atmosphere which has only few particles – spike upwards of 2 million degrees Fahrenheit (about 1,1 million degrees Celsius), while just 1,000 miles below, the surface simmers at a balmy 10,000 F (5,500 C). How the Sun manages this feat remains one of the greatest unanswered questions in astrophysics; scientists call it the coronal heating problem.

For this purpose, Parker Solar Probe will come closer to the Sun than any human-made object ever has – ancient Greeks told the story of Ikarus whose flight trip with feathers and wax already ended already much fartheer from the star in a disaster.

„We’ve been studying the Sun for decades, and now we’re finally going to go where the action is,“ said Alex Young, associate director for science in the Heliophysics Science Division at NASA’s Goddard Space Flight Center in Greenbelt, Maryland at a press conference.

Our Sun is far more complex than meets the eye. Rather than the steady, unchanging disk it seems to human eyes, it is dynamic and magnetically extremely active. Its atmosphere constantly sends magnetized material outward, enveloping our solar system far beyond the orbit of Pluto and influencing every world along the way.

„Space weather“ is the popular term for this celestial phenomenon.

„We don’t have a strong understanding of the mechanisms that drive the solar wind toward us, and that’s what we’re heading out to discover,“ said Nicky Fox, Parker Solar Probe’s project scientist at the Johns Hopkins University Applied Physics Lab in Laurel, Maryland at the press conference.

That’s where Parker Solar Probe comes in. It shall help to answer 3 fundamental questions:
* One is about the corona’s enormously high temperatures;
* The second is the mystery of the acceleration of the solar wind: Though we largely grasp the wind’s origins on the Sun, we know there is an as-yet-unobserved point where the solar wind is accelerated to supersonic speeds. Data shows these changes happen in the corona – Parker Solar Probe will fly directly through it and take measurements;
* The third question is about the mechanisms at work behind the acceleration of solar energetic particles, which can reach speeds more than half as fast as the speed of light as they rocket away from the Sun. Such particles can interfere with satellite electronics, especially for satellites outside of Earth’s magnetic field. 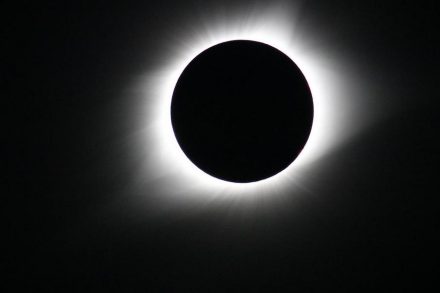 Three main three main technological innovations that will enable the Probe to stand the extreme ambient in the corona:
* the heat shield is a sandwich of carbon-carbon composite surrounding nearly 4,5 inches (11 cm) of carbon foam, which is about 97% air. Though it’s nearly eight feet in diameter, the shield adds only about 160 pounds to the Probe’s mass;
* a cooling system allows the solar arrays to produce power under the intense thermal load from the Sun;
* the fault management system shall detect any problem during the long periods when there is no communication with the Earth and in the Corona when the correct position of the heat shield is important.

Parker Solar Probe is a mission some 60 years in the making. In 1958, US-American astrophysicist Eugene Parker (*1927) had published a groundbreaking scientific paper theorizing the existence of the solar wind. The mission is now named after him, and it’s the first Nasa mission to be named after a living person.

Video of the Start