„View Finder: Landscape and Leisure in the Collection“ in the Museum of Contemporary Photography at Columbia College Chicago

The Museum of Contemporary Photography (MoCP) at Columbia College Chicago is presenting „View Finder: Landscape and Leisure in the Collection“, an exhibition that considers landscape photography from the early 20th century through the present day, examining not only the role of parks as sites of leisure, but also the complex history of landscape photography in the formation of state parks. The show (until September 30, 2018) unites photographs from the museum’s permanent collection and the Midwest Photographers Project, a rotating collection of portfolios at the MoCP by photographers from the Midwest region.

Many of the objects shown are spectacular stone formations which became tourist attractions in the last century.

Historically, landscape photography has played a vital role in conceptualizing the outdoors in the American imagination. Photographer William Henry Jackson’s federally funded photographic survey of the American West in the late nineteenth century was later used to persuade Congress to establish Yellowstone as the first national park.

Decades later, Ansel Adams created some of the most well-known landscape images in history, while working with the Sierra Club to successfully advocate for the government’s expansion of national parks, including Yellowstone and Yosemite. 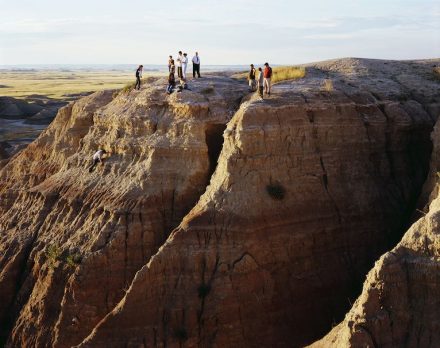 Historical photographs by Ansel Adams and William Henry Jackson are presented alongside works by more contemporary photographers, including David Avison, Jonas N.T. Becker, Marilyn Bridges, Terry Evans, Justin Kimball, and Greg Stimac. Highlights include David Avison’s images from his Changing Chicago series, taken at Chicago beaches in the late 1980s and Terry Evans’s Meet Me at The Trinity series, which captures images of a community gathering outdoors against the backdrop of a highly engineered landscape.

Running concurrently with Lucas Foglia: Human Nature and curated by MoCP curator of academic programs and collections Kristin Taylor, View Finder: Landscape and Leisure in the Collection not only portrays photography’s historical role in the establishment of parks but also a more contemporary view of the various ways people use these spaces for spiritual healing, mental clarity, or other, more subliminal needs.