The Alps grow an average of 1.8 mm in height and move to the northeast at a speed of up to 1.3 mm 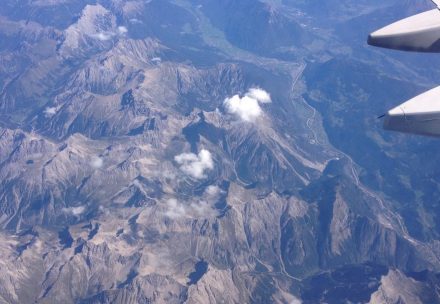 For the first time, a computer model illustrates the dynamics of the mountains from the Maritime Alps all the way to Slovenia

The Alps are on the go: The mountain range drifts northwards and rises 1.8 millimeters. However, there are strong regional variances. In order to follow these movements, researchers at the Technical University of Munich (TUM) have evaluated measurements made by more than 300 GPS antennas over a period of 12 years. Now for the first time, a computer model illustrates the dynamics of the entire Alpine region.

Humans can’t directly perceive the dynamics at work in the earth’s crust. But for 12 years now, the TUM German Geodetic Research Institute has been operating 300 GPS antennas in the German, Austrian, Slovenian, Italian, French and Swiss Alp. They made positioning measurements every 15 seconds. „The data are a goldmine for geodesy, with its objective of accurately measuring the surface of the earth and identifying any changes occurring,“ explains Prof. Florian Seitz of the Chair of Geodetic Geodynamics.

Dr. Laura Sánchez analyzed one-half million observed data items: „The measurements are for example impaired by the weight of snow which lowers the antennas in the winter, and by anomalies in the atmosphere which affect the GPS signals. These interference factors have to be detected and corrected.“

The scientists used the corrected measured values to create a computer model of the entire Alpine region. A first: „Previous analyses were limited to individual regions. Our model reaches from the Maritime Alps all the way to Vienna and thus incorporates all parts of the mountain range,“ Seitz points out. „Furthermore, at a resolution of 25 kilometers, we can represent horizontal and vertical shifts as well as lateral spreading and compression.“ 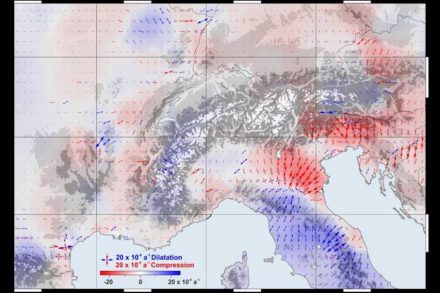 The model depicts visibly both large-scale patterns of movement and regional special factors: Thus, for example, each year the Alps grow an average of 1.8 millimeters in height and move to the northeast at a speed of up to 1.3 millimeters.

In South and East Tyrol, however, a rotation towards the east is superimposed on this movement, while at the same time the mountain range is being compressed.

And the rise in height is not identical everywhere either: Very small in the southern part of the western Alps, it reaches its maximum with a speed of more than 2 millimeters per year in the central Alps, at the boundaries of Austria, Switzerland, and Italy.

The research was conducted in collaboration with the Geodesy and Glaciology („Erdmessung und Glaziologie“) project of the Bavarian Academy of Sciences and Humanities (Bayerische Akademie der Wissenschaften).