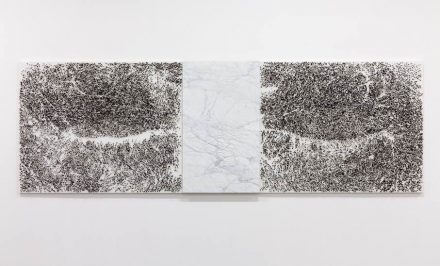 The artist’s main topic is the relationship between sculpture, nature and the human body / Fascination with skin

Until April 28, 2019, the Yorkshire Sculpture Park (YSP) presents an exhibition by Giuseppe Penone showing works from 5 decades of the Italian artist’s career since the late 1960s. The relationship between sculpture, nature and the human body is the central topic in many of his works.

„A occhi chiusi“ (With Eyes Closed, 2009) is a triptych made up of a central marble panel flanked by two canvases covered with acacia thorns which create an image of the artist’s closed eyelids (photo above). 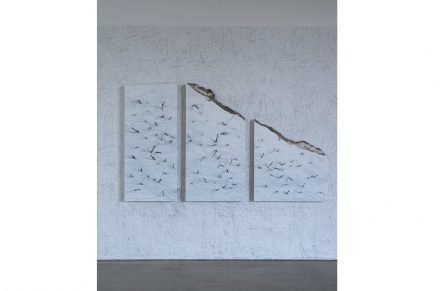 Several works in marble illustrate Penone’s fascination with skin, an often-explored idea in his work as the interface between the body and the surrounding environment (series „Corpo di pietra“, Body of Stone). 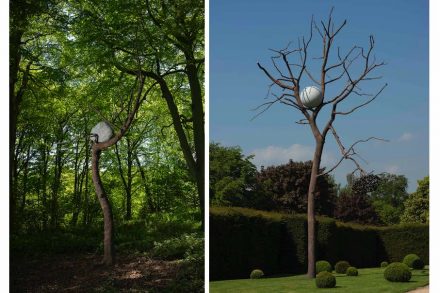 Trees have always held a central position in Penone’s art. He describes them as „not a subject but much more, they are the substance itself of my work”. Part of the exhibition is „Idee di pietra – Olmo“ (Ideas of Stone – Olmo, 2008), a cast tree cradling a river boulder.

Like all the works in this exhibition, art coexists with nature, each encouraging us to think more carefully about the other, as said in the press release of the Park. 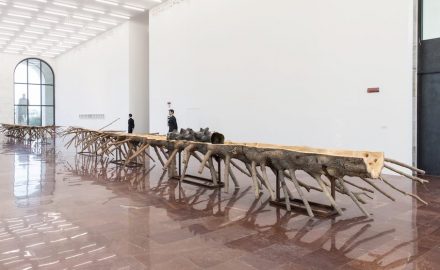 The Underground Gallery in the Yorkshire Sculpture Park shows films, books and resource materials to help visitors of all ages explore Penone’s work, and to see the world through his eyes.

Penone was born in the Piedmontese village of Garessio in 1947, and says of his early artistic development, „not having culture, not being knowledgeable about art, the only reality and identity I had was that of the place where I’d been born, with its local reality”. He began to make experimental work using natural materials that were familiar and freely available in the forest around his home in the late 1960s.

This non-traditional approach to making art led to him becoming an integral part of the important Italian Arte Povera movement that challenged established value systems in the art world and used materials from everyday life.

Yorkshire Sculpture Park is a leading international center for modern and contemporary sculpture which celebrated its 40th anniversary in 2017. It is an independent charitable trust and registered museum situated in the 500-acre, 18th-century Bretton Hall estate in West Yorkshire.