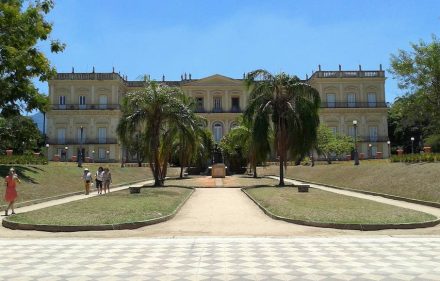 When a museum perishes in flames, be it in a wartime or due to an accident, it is a loss not only for the country but for the whole world. The National Museum in Rio de Janeiro which burned down on the 2nd of September is such a case as is was home to unique exhibits of native Indian culture in South America and itself stood for the emancipation of the former Portuguese colony from the mother country.

The building with a beautiful view on the famous Guanabara bay of Rio de Janeiro – the first sailors thought that is was the mouth of a river and thus named the settlement after the calendar – had been a private villa of a rich Portuguese tradesman. When in 1808 the entire Potuguese court fled from Lisbon to Brazil it was given to King João VI as a present.

The Royal family turned the villa into a representative palace in neoclassical style and gave it the third floor. As it was the style at that time in Europe, the ashlars of the walls were covered with plasterwork in ochre tones. Its name became Palácio de São Cristóvão.

João VI and later his grandchild Emperador Pedro II were interested in natural sciences. In 1818, the King founded the National Museum which in 1892 moved into the Palácio de São Cristóvão.

By that date, Brazil had become a republic and the former imperial palace had hosted the Republican Constituent Assembly from 1889 to 1891.

The museum played a special role in Brazil disengaging itself from Portugal: had the country been before only an object of sciences when its exotic animals and plants were brought to Lisbon and Coimbra to be investigated there, a new generation of American scientists turned the country into a subject which followed its own ways.

At last, the museum held not only 20 million pieces of art and science from all over the world in its exhibitions and archives, among them the biggest meteorite ever discovered in Latin America, many geological finds and fossils. It was also home of Brazil’s biggest library with almost half a million volumes and approximately 2400 rare works.

The reason for the fire disaster was a dramatic neglect of the building in the last years, even despite its 200th anniversary in 2018. Photos in a blog from the University of Brasília document the situation already in 2010. 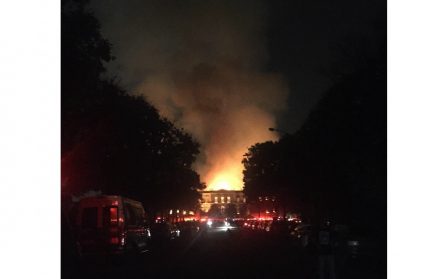