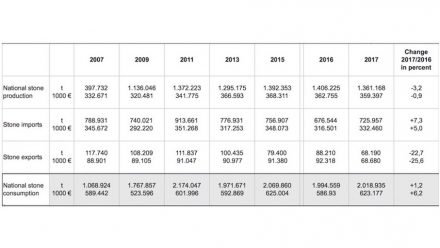 Sustained high level of consumption / Construction sector: for 2019, expectation for 2019 amounts to growth of +2.9 %

Germany has enjoyed a constant level of consumption of natural stone for the past decade as can be seen in our chart. 2017 saw sales amounting to some 623 million €. In mass this amounted to 2 million t. The figures are based on data supplied by the Deutsche Natursteinverband (DNV, German Natural Stone Trade Organization).

There had been a sharp increase: from 2016 to 2017 value of consumption rose by +6.2 or +1.2% by tonnage.
To place these figures in relation to those in other European countries we refer to Dr. Carlo Montani’s Statistical Yearbook. The Yearbook does not show consumption by country, but imports give an indication of the turnover: 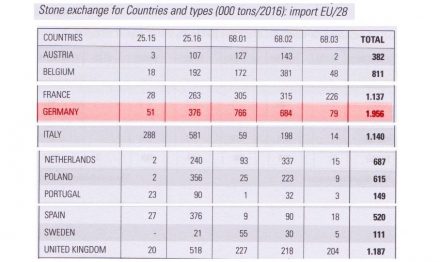 Germany ranked first in imports among the 28 member states in 2016. Only Great Britain, Italy and France showed similar strength. Other countries followed at a distance.

But compared to the USA, Germany is a featherweight in imports, as can be seen in the Statistics of the US-Portal Stone-Update: 2016 saw stone products valued at 2.73 billion € (3.11 billion US-$) imported. Note that the USA counts 328 million citizens compared to Germany’s 83 million. 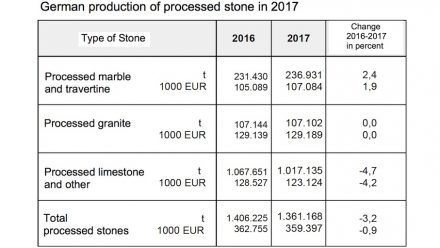 Germany is expecting sustained high growth according to experts of the Natural Stone Trade Organization (DNV). Gross domestic product for 2019 is expected to exceed +2.0% driven by household consumption. The building industry is expected to grow by +2.9%.