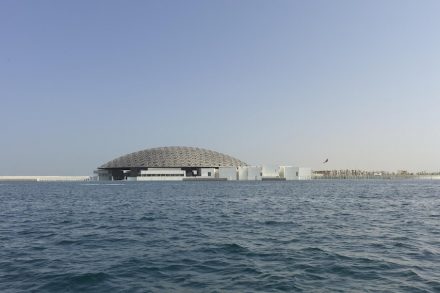 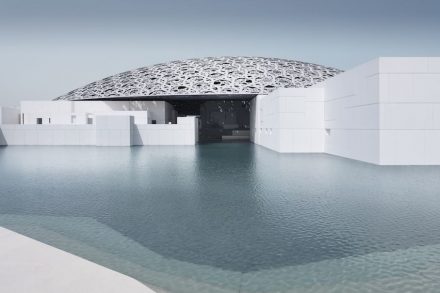 British Journalist for The Telegraph voices despair at the extreme climate: „Even in November, the blinding light and searing heat on the Arabian coast is so intense at midday that you instinctively seek respite in the shade. I have found it under the dome of the Louvre Abu Dhabi.

So, we ask how an architect constructed a museum – one which opened its doors to the public in November 2017 – to house world heritage objects in a climate such as Abu-Dhabi’s. Must such a building not have vault-like, thick walls and isolating doors and windows to regulate temperature and humidity on the interior?

Would such a building not necessarily have bomb-shelter qualities to safely store the priceless works of art?
But, French architect Jean Nouvel conceived a surprisingly different museum complex: 55 individual one and two-story concrete cubes (of which 23 are reserved for exhibits), arranged side by side as in an Arabian community, adjoined to one another and huddled together under a huge lattice dome, beneath which our journalist found shelter from the searing heat and blinding light.

The concrete cubes are equipped with elaborate state-of-the-art air conditioning providing a constant climate for the precious works of art. It also ensures that the air circulated in the interior is free of sand from the surrounding desert or salt from the Persian Gulf. 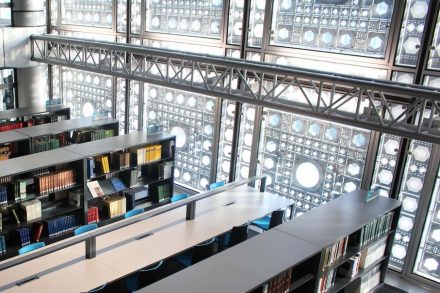 To gain an understanding of the dome, a look at Nouvel’s Institut du Monde Arabe, constructed in 1980 in Paris on the banks of the Seine is helpful. The glass wall to the library on the south side bears a cladding of pierced geometric shapes, which contract automatically like the pupil of an eye if the sun shines too brightly.

The construction was inspired by mashrabiyas, geometric patterns made of wood or natural stone, used in Arabic countries to guard against too much light or heat. The natural air conditioning works based on constant air currents.

In India they are known as Jali.

In the Louvre Abu Dhabi Nouvel constructed an over-sized mashrabiya (devoid of mechanics), 180 m in diameter, spanning across the entire museum complex. A total of four layers of aluminum geometric elements are affixed above and below the steel carrier construction.

Depending on the incidence of light, rays might penetrate the geometric tangle allowing bundles of light to fall on the walls of the concrete cubes or on the floor. They meander across short distances before being seemingly extinguished … only to reappear elsewhere. 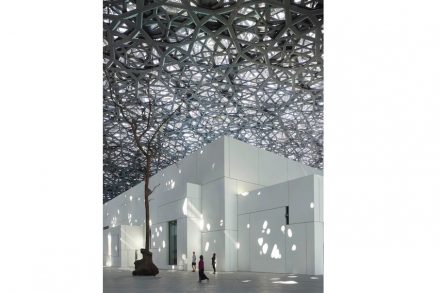 The flooring inside the museum and outside is Italian Pietra di Luserna Gneiss realized by Pietrasanta-based Savema Company near Carrara (tiles) and Abu Dhabi-based Al Hasem Marble and Valencia Marble (installation). Turner Construction of the USA was responsible for construction management.

The idea for the museum dates back to 2007 when the United Arab Emirates and France agreed the construction of a modern art museum to cater to novel needs: from stone-age to modern art, important objects of art and heritage are on exhibit. The focus is on intercultural links.

One example from 2017/2018 was the exhibition „Globes: Visions of the World“ showing early examples of the Globe, astronomic objects and maps showing the changes in man’s perception of Planet Earth including passionate strife by seafarers over the new concept.

„Universality“ is the museum’s vision and mission.

To quote the journalist of The Telegraph: „There is no doubt that it can be refreshing to see art in new contexts like this“.

The project is described in detail in an article published in the New York Times. 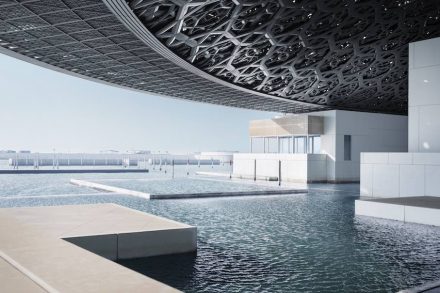