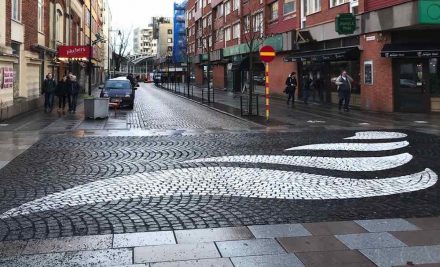 A fairy-tale pedestrian crossing with natural stone was constructed in Småland’s city of Jönköping in the South of Sweden. The street is traffic-calmed so there is practically no conflict with cars negotiating the course. The photo is published in the Swedish natural stone trade magazine „Sten“, which was kind enough allow the reproduction. Karin Nyman, the magazine’s Art Director, was travelling with her camera. The magazine can be downloaded free of charge in Swedish (pdf).

Dance’s Obelisk in London is actually the ventilation shaft of an underground gas storage tank, once part of the London Underground system. This and other little-known bits of trivia are published on a webpage.

A webpage shows the winners of the Monaco Yacht Show. In many vessels, natural stone was used for the interior decoration.

The Sahara Desert has expanded by about 10 percent since 1920, according to a study by the University of Maryland (UMD).

Stonex Canada fair in Toronto is scheduled for November 28-30, 2018 at the Metro Convention Centre. It will co-locate to The Buildings Show. The US Natural Stone Institute will be a partner and present a seminar about natural stone safety guidelines and training resources with collaboration from the Terrazzo Tile & Marble Association of Canada (1, 2).

AEMA, the association of the Spanish Macael Marble, has published a new issue of its online magazine showing projects with its material (English, Spanish).

Two new fossils retrieved from the shallow oceanic basins in Southern Australia date back 580 – 540 million years. Obamus coronatus is a disk-shaped creature bearing spirals on its back (left), and Attenborites janeae is a tiny ovoid less than one cm across. Savvy readers will have recognized the etymology of the names: the first was named in honor of President Obama for his passion for science, the second after British science journalist David Attenborough.

„Italians Make the Difference“ is the title of a promotion video of the country’s ceramic industry.

The Webpage „Camini in Pietra“ shows photos of chimneys with natural stone (Italian).

Video of the month: Deer Stones are 4 m high stone columns in Central Asia. The name was derived from engravings of deer in the columns. They were found e.g. in Tsatsyn Ereg, Mongolia (1, 2)