50 years ago: dismantling and relocating the stone temples of Abu Simbel 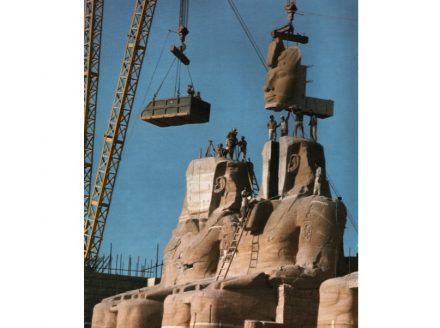 The groundbreaking project was officially concluded on September 22, 1968: the dismantling and relocation of the Abu Simbel temples in Southern Egypt was finished that day. A 3000-year-old monument of the ancient Pharaonic culture had been rescued from the rising waters behind the new Assuan dam.

The dam had been initiated by Egyptian president Gamal Abdel Nasser to produce electricity, collect water for irrigation and prevent from the annual floods of the river Nile.

In the eyes of many people at that time, it was legitimate that a nation’s development could mean the destruction of documents of its past. Yet the Abu Simbel Project showed new thinking. Also new was the international cooperation which had been known before only for military or economic aims.

President Nasser had come out with his plan for a dam in the early 1960ies and soon the Unesco called its members for action to save 13 threatened sites from the ancient Egyptian culture.

From 1963 to 1968, these buildings were rescued. The two Abu Simbel temples, the big one for Pharaoh Ramesses II. and the smaller one for his wife Nefertari, brought special challenges.

The temples had been carved out of a sandstone hill around 1260 BC. For centuries, they had been forgotten until Swiss orientalist Jean-Louis Burckhardt rediscovered them in 1813.

For the rescue, Unesco chose a Swedish-Egyptian concept how to dismantle and relocate the site: Its core idea was to saw the temples into 1035 stone blocks plus parts of the hill into 7700 pieces, transport them to a location 180 m further landward and 63 m higher, reassemble them there and recreate the original landscape around them. 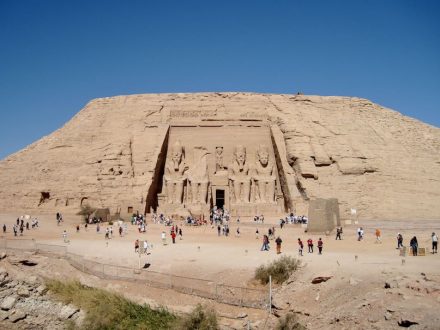 A film on the Unesco-webpage describes the measures taken (see link below). Just to mention a few aspects with meaning for stone:
* parts of the hill could be taken away by normal quarry tools from that time;
* yet the statues and the temple rooms stretching back 63 m into the hill had to be cut with by hand with saws;
* the sandstone was extremely fragile and was reinforced with resin injections;
* after completing the temples at the new site, the joints in the stone were closed and the statues’ surfaces protected.

Important transfer of know-how came from the Italian „Scuola d’arte e mestieri“ in the Chiampo Valley in Northern Italy.

Books have been written about the many aspects of the 8-year-project:
* there was a thread from Lake Nasser’s rising waters which made it necessary to build a dam around the original site – but an extreme rain period in Sudan caused high floods (which luckily did not damage the protection);
* a sophisticated scaffolding inside the temple rooms secured the walls with the inscriptions during dismantling and helped in the reconstruction;
* at the new site, large domes of concrete were erected above the temple rooms and on those domes was layed out the stone for the new hill..

The relocation is so perfect that again each year on February 21st and October 21st the sunrise reaches the rearmost room of the bigger temple. Then, the stone statues of three gods are lit up (while the figure of the god of the underworld remains in the dark). Ramesses is one of the statues in light which means that he’s the representative of the gods’ will on earth.

Normally, in other temples, this so-called ritual of the unification with the sun was realized by taking the gods’ statues to the roof of a temple.

Modern historians interpret Abu Simbel also as a clear message to the tribes South of Egypt: the size of the statues and the inscriptions informing about the military successes of Ramesses II. made clear how powerful the Pharaonic regime was.

The original site is today completely submerged by Lake Nasser.