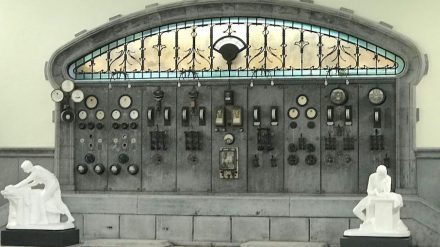 In a defunct power station formerly supplying quarries with energy, public relations work is being carried out for local stone

The switchboard alone at the head of the halls, tells it all, how the world has changed since 1900: levers, fuses and dials are integrated in a splendid wall made of Bleue Belge natural stone. One must first climb a few stairs as if the panel were an altar in a cathedral.

We are describing the Centre d’Interprétation de la Pierre (center for interpretation of natural stone) in the Belgian city of Sprimont. In essence it comprises two enormous factory halls built in the style of glass palaces popular at the turn of the last century. At the end of one of the two, the switchboard is integrated.

Today a center for public relations in Belgium’s stone branch of the Wallonia region. The two halls were erected in 1904 with adjoining smokestack and served as a power station.

Power was first made available only to the quarry, later to the city as well. 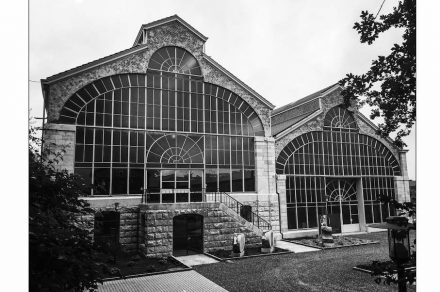 The relation – almost a bond – between the nearby quarry and the power station is obvious not only by the switchboard but also by the outer walls. The contrast of massif stone squares and the filigree metal and glass structure above distinguishes the twin buildings.

1983 saw the shutdown of the power station which later housed a stone museum. Every year, the venue opened and opens its doors for two weeks to sculptors from around the world for the Sculptors’ Symposium (Rencontres Internationales de Sculptures).

After a complete overhaul with a novel concept by Altiplan Architects, the halls became the home of the P.R. center.

The concept follows a production of „interactive logic“ making the visitor an actor in his own play. The presentation reenacts the evolution of stone from the big bang to this very day.

Adjoining areas afford space for events on the common theme. The Symposium takes place in front of the buildings. 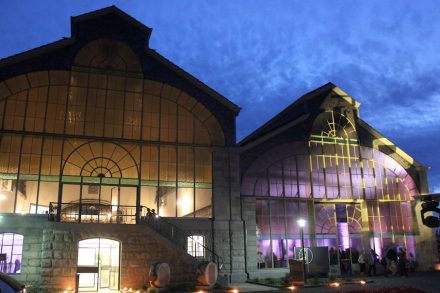 The venue is an attraction in its own right. Moreover, the importance of local stone is tied in with history and geology. Next to England, Wallonia was formerly the strongest industrialized region of Europe. Coal and iron ore were mined here and transformed to steel on site.

Similar industrial methods were at work in Sprimont’s quarries.