The Fitzwilliam Museum in Cambridge, England is now permanent home to the famous bust of Queen Victoria in marble 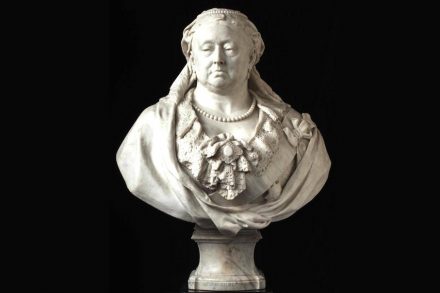 Should you, dear reader, have an interest in sculpting stone and should your travels take you to England, then you must make sure not to miss a visit to the Fitzwilliam Museum at the University of Cambridge where the famous bust of Queen Victoria sculpted by Sir Albert Gilbert in white marble stands.

We might add that the exhibit is now permanent since the British Government vetoed a sale to New York and came up with the price negotiated for the sale in amount of 1 million-£. The funds were collected from donations and the National Heritage Memorial Funds.

We haven’t visited England since the bust was put on exhibit in June 2019 but the photos alone reveal the quality of the masterpiece: the sculpture shows the perhaps most important woman in the history of Great Britain as Her Majesty but at the same time as a person marked by the gravity of life: time has left its tole not only in age but also in the hardship of losing her dear spouse, Prince Albert. 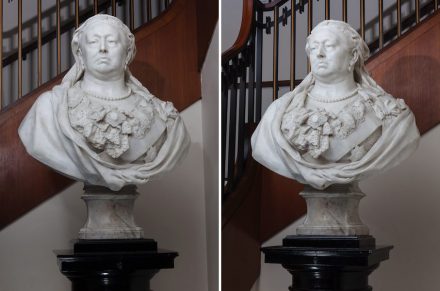 Depending on the viewer’s perspective, Her Majesty’s facial expression changes. The photos show her at once majestic, cool and aloof, in complete control but also resigned, introverted and deeply saddened.

The bust was solicited by the Army and Navy Club in 1887 on the occasion of the 50th jubilee of Queen Victoria and possibly on occasion of her first public appearances after a lengthy pause from public life. Her reclusiveness had nearly caused a national crisis among great portions of her Royal Subjects.

Sir Albert Gilbert (1854-1934) worked on the sculpture between 1887 and 1889. One might say that two generations met head on: he was in his mid-thirties and had reached fame and had made a name for himself in particular as a representative of the New-Sculpture-Movement, which sought to lend more life-like features to sculptures. He had previously crafted an over-sized bronze sculpture of the Queen with the title („Jubilee Memorial“).

Queen Victoria was in her late 60s and at the height of her popularity. 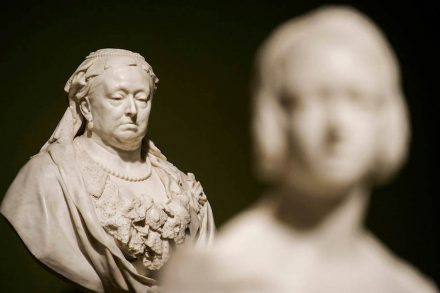 She did not sit as a model. It was rather from photos of the Queen that he took the likeness. His mother posed in the black attire – by then the only color of clothing the Queen wore. Sir Albert Gilbert respectfully said that he was faced with two Queens: „One was Queen of my country – the other Queen of my heart“.

The natural pose is uncanny: „sagging pudgy skin, wispy hair, luxurious billowing drapery, crisp lace shawl, and intricate jewellery, including the star of the Order of the Garter and a poignant double-portrait medallion of Victoria and Albert“ as described by the museum.

The artist worked the sculpture alone despite the fact that he had little experience working in stone. He preferred working metal, e.g.: the new metal aluminum from which is famous statue at Piccadilly Circus dubbed Eros was cast. He worked on both pieces simultaneously. 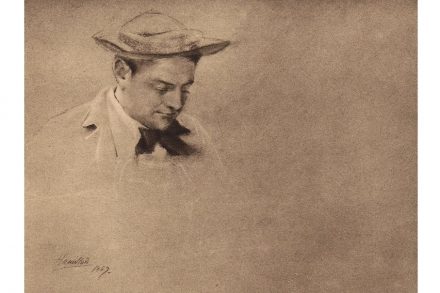