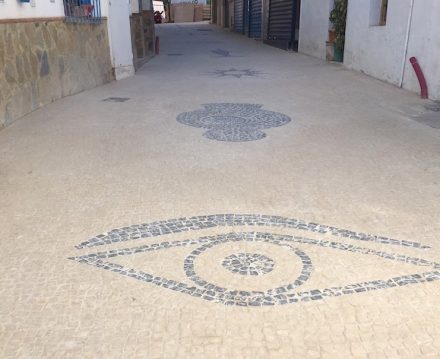 Cobblestones like those in Terremolinos‘ Calçada Portuguesa are on show at Granilouro Company on the company website. The company had previously covered Madrid’s Avenida de Portugal in cherry blossoms (Spanish 1, 2).

Update: „Arena STONE 2018“ is the name of the lecture series at Poznan Stone fair (November, 14-17, 2018). The complete program of is now available for download.

Granitech is the name of a new stone fair which will take place in the Hungarian capital Budapest May 27-29, 2019. The link can be found in our fairs’ calendar.

The questions and challenges of building with massive stone are the topic of the exhibition „Pierre, révéler la ressource, explorer le matériau“ until December 02, 2018 in the Paris Arsenal (French).

„Alba“ is the name designer Valentina Zeundel gave her marble wallboard with room for a mirror and trinkets or jewelry.

One of the Red Dot Awards for 2018 went to German designer Corian Siedentopf for his wall design in Compaq quartz composites. 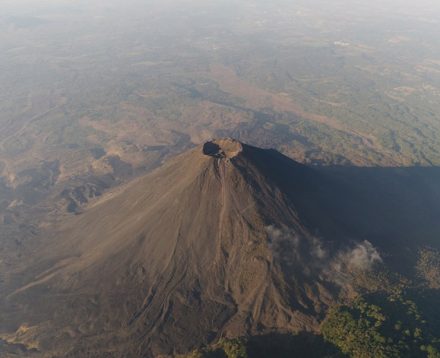 Santiago Arau is a Mexican photographer specializing in fantastic snapshots of volcanoes, among others (Spanish 1, 2).

The number of millionaires living in the United Arab Emirates will reach just over 140,000 by 2027 (2017: 88,700), whilst the number of billionaires is expected to reach around 30 by 2027, as published in the „The UAE 2018 Wealth Report“. In the coming decade, the federation of 7 emirates at the Gulf (Abu Dhabi, Dubai, Sharjah, Fujairah, Ras al-Khaimah, Ajman and Umm al-Quwain) will strengthen its profile as a hub for luxury products and also for firms managing the assets of the rich. On 22 pages, South African market researchers from New World Wealth company give details of the economy with a population of 9,3 million. Download for 271 €.

A female marble figurine more than 300o years old was found in the prehistoric settlement of Akrotiri on Santorin island.

Video of the month: Abirochas, the Brazilian Natural Stone Trade Organization, has published a short and a long-version video on sustainability of natural stone, according to the description (1, 2).