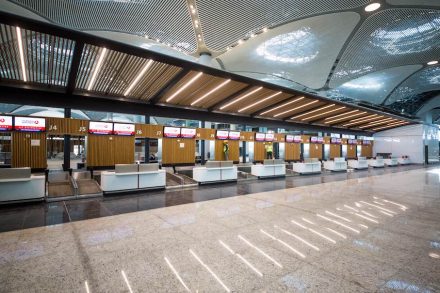 Grupo Guidoni provided more than 110,000 m² of tiles for the traffic hub of superlatives

Imported natural stone from Brazil is used for the flooring in the new Istanbul airport opened on October 29th, 2018, which is the 95th anniversary of the foundation of the Turkish Republic. About 110,000 m² of granites Black São Gabriel and White Guidoni in tiles of 89.7 x 89.7 x 3 cm had been provided by Grupo Guidoni, one of the biggest stone companies in Brazil.

For the stairs were used another 10,000 linear meters with Black São Gabriel.

Recently, Guidoni had received another order of about 8000 m².

As Rayner Guidoni, vice-president of the company is quoted on the firm’s webpage, Brazilian granite was chosen for its „durability and easy cleaning in areas with an extreme flow of people and loads“. 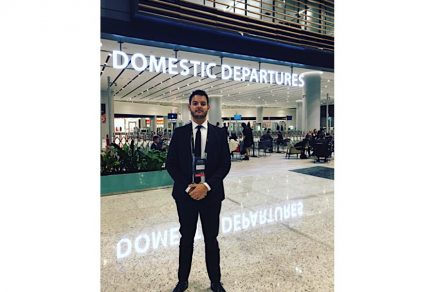 A special challenge for the company was to guarantee the same surface characteristics for the tiles all over the giant space. Before, Guidoni had already done the flooring in the Rio de Janeiro International Airport.

Surprisingly, there had not been loud critics from the Turkish stone sector about the imported stones. Only Marble Trend magazine had been continuously fuming, e.g. when editor-in-chief Çağlayan Sueli titled an ironic editorial with „What a happiness it is to say I’m Brazilian…“

Yet in a report from December 2016, an airport official had stated that marble could not be the appropriate material for passenger areas in airports and that local marble would be used „in additional service buildings“.

In respect of local granite he said: „However, we could not find a quarry fulfilling our requirements for the capacity and radiation level of the granite.“

The price for the Brazilian granite had been „$50 per square meter“, he added. 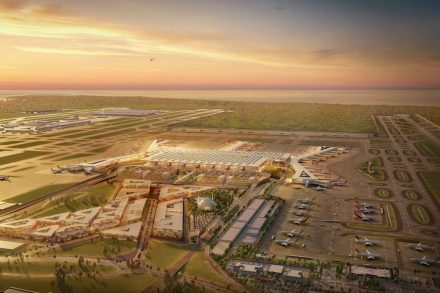 The new airport is to become a traffic hub of superlatives: at its final stage probably in 10 years, it will have 200 million passengers per year doubling the capacity of Hartsfield-Jackson in Atlanta and making the new – simply named – „Istanbul airport“ the biggest on Earth. It is conceived to be a link between the West and the East – Istanbul itself has districts on the European and on the Asian side of the Bosporus.

Yet the airport’s start was very modest. Most of its 76.5 million m² are still under construction. Only a few regional flights will take off and land until the end of 2018 when there will be the big haul from Atatürk Airport.

The total cost of the project is US-$ 12 billion. This is the biggest sum Turkey has ever invested in one single project.