Belgium goes into the second round with its „Local Stone Ambassadors“ 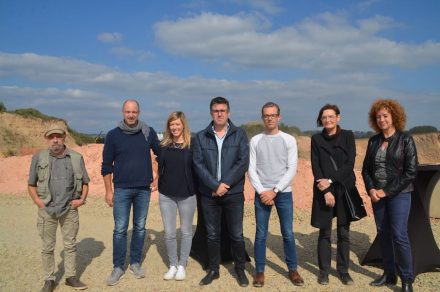 Latest news: Works by the Local Stone Ambassadors are on show at the Espace de Wallonie in Eupen until January 11, 2019.

2017 saw the engagement of the first three Ambassadors. One was the artist Florence Fréson, who, among other things, crafts musical instruments from stone together with the „Lithos“ group. Architect and Engineer Daniel Dethier and landscape artist Serge Delsemme had all signed on for one year.

One of their key activities involved presenting local stone as „Diamonds of Nature“, whereby each of the Ambassadors was given the opportunity to give a short interview.

In June 2018 the initiative entered the second round, now engaging 7 Ambassadors. They were presented to the public in a press-conference held at Tra-Ge-Co’s Waimers Quarry. The representatives are:
* stonemason Sandrine Brasseur,
* artist Anne-Marie Klenes,
* artist and „Slatewoman“ Anne Jones,
* artist Lambert Rocour,
* architects Norbert Nelles, Éric Grondal and Jean-François Crahay. 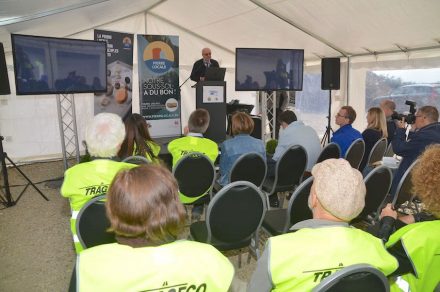 The initiative is part of a package of marketing measures undertaken by the Trade Organization in the last years. One of these was „Pierre Locale“ („local stone“) following the lead of the wood branch. Both joined forces in an effort to steer customers away from cheap imports. The slogan was „Notre sous-sol a du bon“ (our basement is a solid foundation).

The point is not to make negative publicity for the competition but rather to pronounce the advantages of local material. These are, e.g., a better ecological footprint resulting from shorter transportation routes, and national pride.

Another initiative is the „Objectif Blue Stone“, with the aim of promoting Belgian Pierre Bleue under EU supervision. This is a limestone formerly marketed as „Petit Granit“.

The Trade Organization Pierres et Marbres de Wallonie counts 29 members with a total of 36 quarries. Turnover is estimated at 100 million €. The branch provides 800 jobs in production itself and a total of 2,400 related work places.

Wallonia is the southernmost part of Belgium and comprises some 3.6 million citizens according to Wikipedia in an area about the size of Paris and its metropolitan regions. Some 15 types of stone are quarried there.

Belgium is among the countries with the highest per-capita consumption of natural stone. In 2017 as the year before, it took third position right behind Switzerland and Saudi Arabia according to Dr. Carlo Montani’s Statistical Yearbook („XXIX World Marble and Stones Report 2018“, Aldus Edizioni, Carrara).

Verona’s Marmomac had announced in its 2018 edition that it, too, intends setting up a „a network of marble ambassadors“. 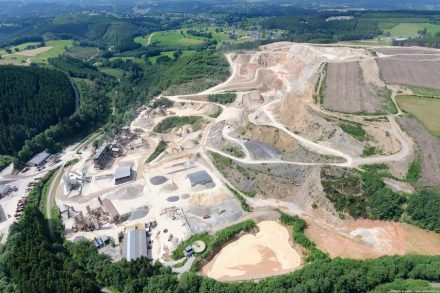