„Masters of Stone” awards of Marmomac 2018 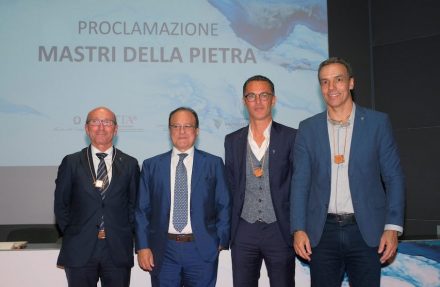 Tales Pena Machado is partner and managing director of MAGBAN Mármores and Granitos Aquidaban Ltda, a Brazilian family company founded 31 years ago, at the helm of 12 quarries exclusively owned by the group with 280 employees. He also collaborates in the management of 3 quarry concessions shared with other prestigious companies in the sector.

A graduate in Economics, in 2003 he became president of the Credit Federation of decorative stone, lime and limestone industry entrepreneurs in Espírito Santo State – SICOOB CREDIROCHAS, which he held found in 1999 together with a group of 37 other entrepreneurs.

Also president since 2016 of the Union of decorative stone, lime and limestone of Espírito Santo State – SINDIROCHAS, having been a member of the Board since 1994. He manages and coordinates 2 companies with social goals.

Domenico Cereser is an entrepreneur married with 4 children. After gaining a diploma in languages at the Stimate High School in 1984, he graduated in political sciences with economics at the University of Padua in 1994.

He joined the Cereser Marmi SpA family company in 1994 as a member of the board of directors, flanking his father – the founder of the company – in the management of the business. In 2005, he was appointed sole director of the company, a position he still holds.

A long-standing supporter of Marmomac, he has distinguished himself in initiatives sustaining Natural Stone and the internationalization activities promoted by Veronafiere, the Verona Marble District and Stone Group Greece.

Roberto Zorzi is the Mayor of Sant’Ambrogio di Valpolicella. He is the son of quarrymen: His father managed a Rosa Corallo quarry and was a member of the Cooperative Union of Marble Workers. During the summers, in the period from 1976 to 1980, he always worked as an apprentice in the stone sector that deepened his knowledge of types of material and the range of processing operations in which companies based in the Verona district excel worldwide.

At the same time, he studied for five years at the Paolo Brenzoni School of Art in Sant’Ambrogio, learning the techniques of stonemasons.

Before being elected Mayor, he was Deputy Mayor of Sant’Ambrogio di Valpolicella from 2004 to 2014 with specific responsibility, among others, for quarries, which further expanded his knowledge of legislation in this sector. In his role as Mayor, he has always sought to promote the local area and its bonds with the marble and natural stone processing industry.

The Master of Stone awards is meant to continue the tradition of the Ancient Free Guild of Stone Arts in Verona dating back to 1319. The insignia is a cube of Verona red marble with a bronze plaque of the Guild and a silver chisel.