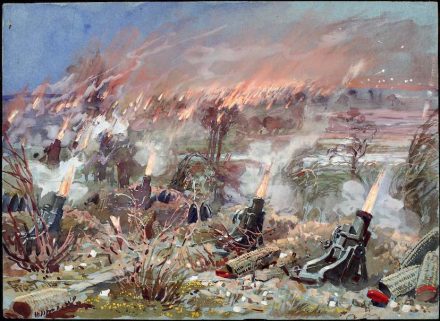 Do you, dear readers, remember what you did four years ago, say from the 28th of July 2014 until November 11th, 2018?
Had you lived in Central Europe one century earlier, you would have been at war in some form or another, i.e., in WWI, or as it was called then „The World War“ or „The Great War“.

But Europe was not alone in experiencing an unprecedented high death toll of those four years. The Superpowers of yore carried their wars into their colonies or recruited troops from there to stock up their armies: one third of Great Britain’s soldiers were recruited from overseas. 60,000 left their lives in Europe, later giving the impetus for Gandhi’s Independence Movement.

All around Verdun bloody battles of WWI were fought. The Verdun memorial commemorates 300 days and 300 nights of slaughter in 1916. Just in time for the 100th jubilee, architect Brochet-Lajus-Pueyo completed renovation of the museum and exhibits. The sandstone façade is of local provenance; it can be found in many a memorial or building in the area as well as in farm towns in the area.

„The Battle of Verdun“ began with 10-hour artillery bombardment by 808 guns. One officer attempted to put it into words: „All hell broke loose. A curtain of flames rose … from 9 to 10 a.m. the inferno was so powerful that the earth quaked, the sky was a giant boiling cauldron. Headaches and deafening noise allowed but fragments of speech to penetrate. Logical thought and perception of gravity seemed to be suspended.“

At times there were as many as 10 detonations per second and explosions continued for up to 12 hours without pause. Soldiers of both sides huddled in their cold, wet, trenches in constant fear of mutilation or of being buried alive.

Officers who had arrived during the night and looked around after sunrise described what they saw: „We stood among corpses … one by one companies were cut down and new troops moved in to replace the dead. Now it was our turn.“ 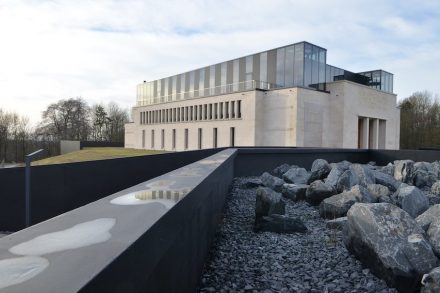 Verdun alone saw some 300,000 fallen troops, an average of 1000 per day. The casualties also included some 400,000 wounded, many of whom went mad from battle shock.

The emotional base of this and the following WWII, a mere 21 years later was a deep hatred among people of different national. There was a deep enmity between Germans and French according to doctrine – today one would say the hatred was in their genes.

A new view of the world

Laudable that after WW2 the world leaders were able to clean up and set aside the old-world view.

The idea was plausible: The economy, a driving force of all wars, was to become the engine of peace by tying production and trade so closely that reaching to weapons would no-longer be an option.

The first step was founding of the European Coal and Steel Community. It was a symbol of mutual trust: neighboring States were to inform one another of the amount of coal and steel, i.e., goods relevant for building an arsenal, they were producing and where it was to be implemented. The founding States were Belgium, Germany (West), France, Italy, Luxemburg and the Netherlands.

Then came the European Economic Community (EEC), followed by the European Union (EU) and finally for most of its member States, the common tender Euro.

Scope of performance of the new Community was not merely to calibrate the interests of member States.

The driving force and true dimension of the idea born by the founding fathers was to give up the old-world order once and for all and start afresh. After thousands of years of human history: a world with lasting peace must be possible.

This type of radical change had been envisioned only be newly founded religions.

In literature, on the other hand, the idea was not new, i.e., Shakespeare based his play Romeo and Juliette on the strife between families who reached out to one another at the grave of their children.