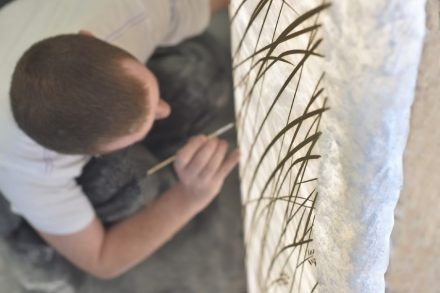 Alabaster is the stone Atelier Alain Ellouz has chosen for its worldwide famous interior design projects. The newest is the golden wild grass in the Parisian jewelry boutique of Chaumet where the plants’ image had to be engraved into the white translucent stone.

„The greatest difficulty was finding the best way to engrave such a delicate pattern in alabaster without risking damaging the stone,“ Atelier Alain Ellouz (AAE) informs in a press release.

„After trying several techniques, by hand and then sanding, we finally opted for the technique of digital engraving which happens to be the most effective,“ explains designer Marion Biais-Sauvêtre. „Sanding technique erases the bounces of light while digital engraving allows fine-tuning the drawing and highlighting all the subtleties of variation of light possible.“

„Our expertise in lighting alabaster has been a great asset on this project. Chaumet works with lighting designers, but the complexity of backlighting the carved stone was a specific know-how that only us were able to provide. The other difficulty was the hook system which had to remain invisible,“ adds Marion Biais-Sauvêtre.

Atelier Alain Ellouz calls itself „the goldsmith of alabaster and rock crystal“. Lightings, bespoke projects and furniture are the three axis of its portfolio. 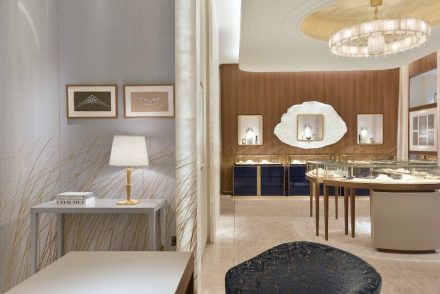