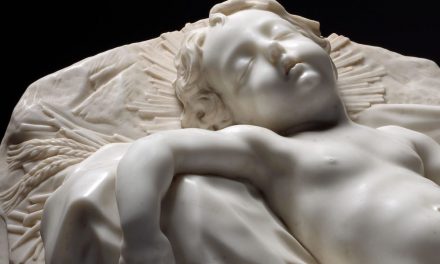 The Cleveland Museum of Art has acquired an outstanding example of Italian Baroque in marble: the „Sleeping Christ Child“ by Filippo Parodi, assistant to Bernini and leading sculptor of the Genoese Baroque.

Parodi began his career as a woodcarver and subsequently worked in both wood and stone. He made two trips to Rome where he worked in the studio of Gianlorenzo Bernini (1598–1680), the leading sculptor of the Italian Baroque, famous for his design of the Piazza San Pietro in Rome and his works within the Basilica of St. Peter.

The Sleeping Christ Child was sculpted about 1675 for Genoa’s wealthy Durazzo family. Christ, depicted as a young child, is sprawled on a bed of straw, his head thrown back in slumber and his right arm dangling. A subtle radiance framing his head indicates his divinity. 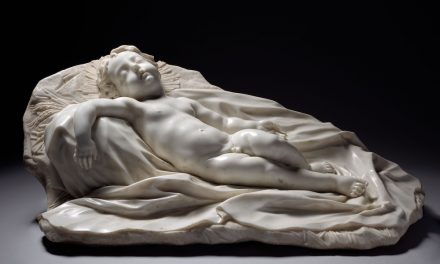 The artist used varying degrees of polish to differentiate surface textures: Christ’s body is burnished to a soft gleam, while his hair and the straw bedding are more roughly carved, absorbing rather than reflecting the light.

Images of the sleeping Christ Child appear often in Renaissance and Baroque art, introducing both a premonition of Christ’s fate and underscoring the notion of sleep as a metaphor for death. Here, ears of wheat among the straw allude to the Eucharistic sacrament.

Parodi adapted the composition for at least two later sculptures depicting the dead Christ: a polychrome wood sculpture in the Church of San Luca in Genoa; and the central figure in a pietà made for the Church of Santa Giustina in Padua. In both, Christ’s lifeless body assumes a pose nearly identical to that of the sleeping child in the newly acquired work. The languid sensuality of Parodi’s figure recalls secular models as well, namely the Sleeping Cupid, a popular theme since antiquity.

Monumental works by Parodi, or other leading sculptors of the Italian Baroque, rarely appear on the market. Sleeping Christ Child is now on view in the Reid Gallery of the Cleveland Museum of Art.

The Cleveland Museum of Art

Source: The Cleveland Museum of Art