Chicxulub inferno: for a few minutes, rocks became fluid formed the crater with a mountain ring in the center 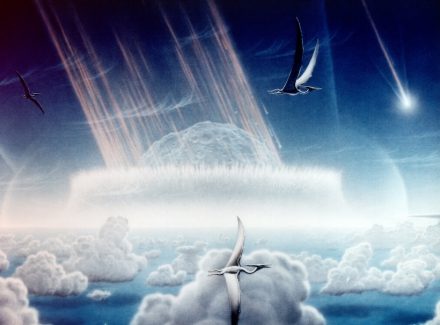 About 66 million years ago, a meteorite hit the Earth at the Yucatán Peninsula in what is now Mexico. The event triggered a mass extinction that eradicated approximately 75 percent of all species and ended the era of dinosaurs.

The impact formed the gigantic Chicxulub Crater with a diameter of about 200 kilometers. Its center lies underneath the Peninsula near the Mexican port city of Chicxulub.

Now, a team of international geologists has succeeded in describing for the first time the mechanical behavior of rocks during such an event: extremely strong vibrations let rock flow like liquid for a crucial few minutes after the impact. This created the mountainous ring of smashed rocks inside the crater, called a peak ring.

Chicxulub, is the only crater on Earth with has such a structure well known from other planets in our solar system. 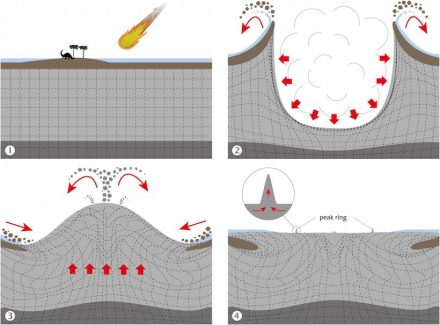 At the Chicxulub impact, temperatures of 10,000° C melted and evaporated the meteorite itself and parts of the Earth’s crust. Then a shock wave molded a crater 30 km deep and 100 km wide. As this giant hole collapsed, the mass of rock behaved like a viscous mass, shooting up to form a 20 km high mountain. This led both to the summit ring and to the flattening and widening of the crater.

„There have been a lot of theories proposed about what mechanism allows this fluidization to happen, and now we know it’s really strong vibrations shaking the rock constantly enough to allow it to flow,“ said Jay Melosh, a professor of earth, atmospheric and planetary sciences at Purdue University.

The Chicxulub crater isn’t easily accessible by traditional standards either; it’s been buried throughout the last 66 million years. So the scientists drilled a core roughly 15 cm in diameter and about 1,28 km deep into the Earth, collecting rock that was shattered and partly melted by the impact.

Understanding impacts is a far-reaching topic: „The results of our research help understanding the formation of large impact craters also on other planets in our solar system,“ said Prof. Dr. Ulrich Riller of the Institute of Geology of the University of Hamburg, lead author of the study.